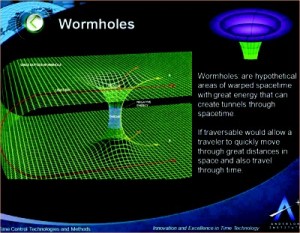 Einstein’s Special Theory of Relativity showed how time itself could slow down, given one is travelling close to the speed of light. But the actual possibility of time-travel was sparked by idea of utilizing black holes as it is known that they warp space-time. But how to overcome the paradox that anything that falls into the black hole is drawn toward the singularity at its centre and crushed into nothingness. However, the Einstein’s equations have solution which suggests that, the traveller might avoid the singularity of black hole and pass through a small passage into a different realm of space-time, say another Universe. And this passage is termed the Wormhole!

Wormhole is a hypothetical tunnel, connecting two different points is space-time. So, a trip through the wormhole could take much less time than a journey between the same starting and ending points in normal space-time Take example. First, consider the curvy aspect of space time as the surface of an apple. Now, the wormholes in space are like the earthly wormholes inside of the apple. Worms tunnel their way straight through from one surface of the apple to another, shortening the distance between the two points dramatically. This means, instead of walking on the surface of the apple, all the way from point A to the point B, one finds a shorter and much quicker path through the wormhole that exists inside the apple, where destinations remain the same and the journey is faster. It is believed that the ends of a wormhole could be intra-universe (both ends that exists in the same Universe) or inter-universe (where one end lies in one while the other is the connecting to a new Universe).

Wormholes are tunnels with just one entry and exit which links different parts of space time continuum. It is believed that if both ends of wormhole are brought together with the aid of an electromagnetic or gravitational field, it will be possible to keep entering them and re-entering them and travel backwards and forwards in space-time. The classical physics of Newton and Einstein, however, suggests that, once entered, a wormhole is likely to slam shut immediately. But according to quantum physics, there are ways out, and one suggestion includes the traveller would need an anti-gravity device to exert negative pressure to counter gravity which will ensure the journey and safe return of the traveller. But many ideas and concepts regarding the travelling through time via wormholes are still in the hypothetical stage. Many scientists believe that there are tiny wormholes, tinier than the atomic nucleus, which occur within the known space-time. Those are spontaneously created through quantum fluctuations. Scientists would then be able to harvest these wormholes and use them as time machines.

Russia plans to send probe to moon in 2015