With Syria, Vladimir Putin positions himself on global security stage 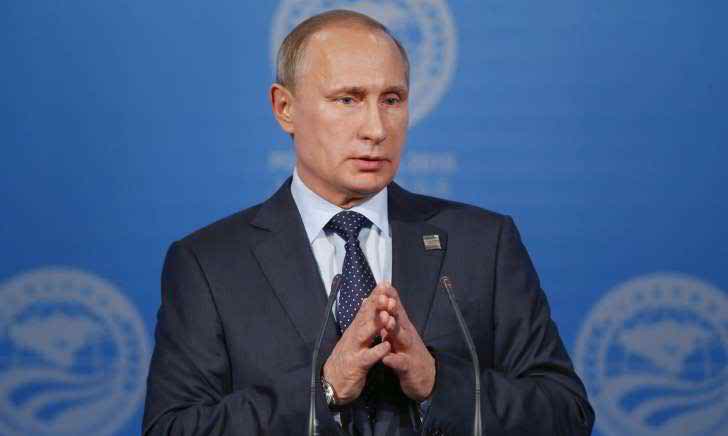 e-News® | The NEWS Company…MOSCOW, Sept 26, 2015 : Russian President Vladimir Putin is maneuvering for a comeback as a major player in global security with his brash military buildup in Syria and an ardent appeal for coordinated action with Western powers to defeat Islamist extremism.

Putin’s Syria initiative, to be unveiled Monday in his first address to the U.N. General Assembly in a decade, has been unleashed in the Kremlin leader’s signature fashion: move in with boots and arms on the ground, creating a reality of Russian influence in the war zone and, in this case, leaving the United States and its allies to choose between spurning Russia’s strategy or capitulating in order to get its help in eradicating a common enemy.

Kremlin officials have been on a diplomatic blitz for months that analysts see as having the twin objectives of diverting attention from Russia’s disastrous interference in Ukraine and of spotlighting the more ominous threat to global security posed by extremist militias such as Islamic State. Diplomatically ostracized for annexing the Crimea region from Ukraine and backing pro-Russia separatists near the eastern border, Putin has already succeeded in changing the global security conversation from the East-West tensions provoked by his Ukrainian gambit to one of opportunity in Syria for the former Cold War adversaries to collaborate on a more existential threat.

Much will depend on how Putin’s overture at the General Assembly is received by Obama administration officials. Secretary of State John F. Kerry has been pushing behind the scenes for talks with Russia on Syria, and he and other officials are open to some sort of military cooperation aimed at “deconfliction” of Syrian skies potentially crowded with rival aircraft. Kerry has also suggested that the Obama administration is willing to leave Syrian President Bashar Assad, a longtime Russian ally, in power for some time, though not indefinitely. But U.S. officials remain uncertain of Putin’s motives, have little trust in him, and fear that the Syria buildup is more about protecting Assad than trying to broker a solution to the war. Western leaders have mostly shunned Putin for aggression against Ukraine, which they consider a violation of international law. But a break in that posture is expected after Putin’s Monday speech, including a face-to-face meeting with Obama.

Kerry and Russian Foreign Minister Sergei Lavrov have already spoken by telephone three times since the undisguised Russian military buildup early this month. And Russian Defense Minister Sergei Shoigu and Defense Secretary Ashton Carter had their first significant contact last week in a phone call that hinted at willingness on both sides to pursue a new course in Syria. Putin disclosed the gist of his plan Sept. 15 in a speech in the Tajik capital of Dushanbe. He told security officials from former Soviet republics that the danger posed by Islamist militants can’t be contained without the involvement of Assad and his forces. Thousands of disgruntled Muslims from Russia’s restive Caucasus region have joined Islamic State, many returning to direct their militant training against troops, police and civilians in a campaign of terrorism that threatens the peace across Russia’s “soft underbelly” of Muslim communities in Central Asia.

“Without the active participation of the Syrian authorities and the military, it would be impossible to expel the terrorists from that country and the region as a whole, and to protect the multi-ethnic and multi-confessional Syrian people from destruction,” Putin said in his Dushanbe address. A week earlier, Putin observed that Russian authorities were considering a wider range of military actions in Syria, including airstrikes. In the days before the U.N. gathering, Putin received a parade of Middle Eastern and Muslim leaders for talks on his vision for ridding the region of the militants. Turkish President Recep Tayyip Erdogan, Palestinian leader Mahmoud Abbas and Israeli Prime Minister Benjamin Netanyahu have visited over the last week.

Lavrov has been shopping around the idea of an East-West alliance against Islamic State for months, beginning with a May meeting with Kerry in Sochi. Proposed collaboration has so far foundered on the diametrically opposed positions of Moscow and Washington on Assad’s future. Russia is Syria’s most important European ally and weapons supplier, and Putin has insisted that peace talks and common cause against Islamist militants cannot succeed without the Syrian leader. Putin’s Crimea seizure stirred a surge in Russian nationalist pride, conferring on him unprecedented popularity ratings for recovering a region many consider rightfully part of the Russian motherland. The Russian rally around Putin has ebbed only slightly in the wake of U.S. and European sanctions battering an economy hit by a drastic fall in oil prices.

But Putin miscalculated a year ago when he pulled back support for the pro-Russia separatists in eastern Ukraine as they bore down on the strategic Ukrainian port city of Mariupol, said Dmitri Oreshkin, a political scientist and senior researcher at Moscow’s Geography Institute think tank. He said the “power ministries” in Moscow – defense, interior and intelligence – see Putin’s hesitation to capture Mariupol as having deprived Russia of restoring its 200-year domination of Novorossiya, as the coastal region of southeast Ukraine was known before the 1917 Bolshevik Revolution.

“From the point of view of the power structures in Russia, Putin is a loser. He gave away Novorossiya and what did he get in return? A Crimea region that is virtually blockaded and two regions of eastern Ukraine that are a drain on the Russian economy that is already in crisis,” Oreshkin said. Syria offers Putin a chance to take the lead in resolving a major international security crisis, as the Kremlin did two years ago in brokering the collection and destruction of Syria’s chemical weapons stockpiles.

New pitfalls loom for Moscow in a ramped-up Syria involvement. Russian casualties in a distant war would spur comparison with the Kremlin’s costly occupation of Afghanistan during the 1980s. But like the alliance forged in 1941 between the Soviet Union and the Western allies, the threat of escalating savagery posed by Islamic State can be the higher ground that draws the Cold War adversaries to put aside lesser differences, said Konstantin Sivkov, former senior officer of the Russian military general staff.

“Today the enemy is Islamic State but it is no less serious than Hitler’s Nazism,” Sivkov said. Whether Putin succeeds in drawing Western and Mideast states into a broader anti-Islamic State coalition is uncertain, say analysts who see advantages for both sides to put the Ukraine standoff on the back burner. Sivkov envisions a division of the anti-Islamic State mission to have Russia guide Syrian army actions on the ground with Russian arms and intelligence, while the United States and its allies provide reconnaissance and air power to back so-called moderate rebels in their attacks on the Islamist extremists. “To exclude the possibility of midair collisions of Russian and U.S. aircraft, it would be expedient to divide the country into two zones of responsibility for aircraft operations – one controlled by Russia and the other by the United States,” Sivkov said of the plan being put forward by the Kremlin.

Margarita Simonyan, editor in chief of Russia Today television that projects Kremlin views around the world with its English, Arabic and Spanish broadcasts, casts the militant Islamist threat as a powerful inducement to put other disputes aside. “If we don’t do something today, what do they get access to tomorrow? Nuclear bombs?” she says of the cost of inaction against the Islamist militants. “Suddenly now its not about the West and Russia, it is about the whole civilized world versus the ugly barbarian world and the results we are witnessing every day.”