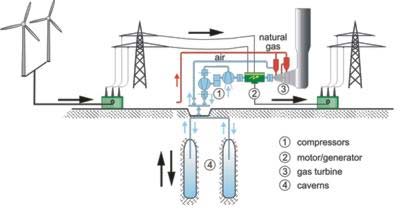 One of the problems with wind power is that when there is no wind then there is no power. Offshore wind could provide abundant electricity — but as with solar energy, this power supply can be intermittent and unpredictable. A new approach from researchers at MIT could mitigate that problem, allowing the electricity generated by floating wind farms to be stored and then used, on demand, whenever it’s needed.

The key to this concept is the placement of huge concrete spheres on the seafloor under the wind turbines. These structures, weighing thousands of tons apiece, could serve both as anchors to moor the floating turbines and as a means of storing the energy they produce.

Pumped-storage hydroelectricity or other forms of grid energy storage can store energy developed by high-wind periods and release it when needed. The type of storage needed depends on the wind penetration level — low penetration requires daily storage, and high penetration requires both short and long term storage — as long as a month or more. Stored energy increases the economic value of wind energy since it can be shifted to displace higher cost generation during peak demand periods. Although pumped storage power systems are only about 75% efficient, and have high installation costs, their low running costs and ability to reduce the required electrical base-load can save both fuel and total electrical generation costs.

Whenever the wind turbines produce more power than is needed, that power would be diverted to drive a pump attached to the underwater structure, pumping seawater from a 30-meter-diameter hollow sphere. (For comparison, the tank’s diameter is about that of MIT’s Great Dome, or of the dome atop the U.S. Capitol.) Later, when power is needed, water would be allowed to flow back into the sphere through a turbine attached to a generator, and the resulting electricity sent back to shore.

One such 25-meter sphere in 400-meter-deep water could store up to 6 megawatt-hours of power, the MIT researchers have calculated; that means that 1,000 such spheres could supply as much power as a nuclear plant for several hours — enough to make them a reliable source of power. The 1,000 wind turbines that the spheres could anchor could, on average, replace a conventional on-shore coal or nuclear plant. What’s more, unlike nuclear or coal-fired plants, which take hours to ramp up, this energy source could be made available within minutes, and then taken offline just as quickly.

The system would be grid-connected, so the spheres could also be used to store energy from other sources, including solar arrays on shore, or from base-load power plants, which operate most efficiently at steady levels. This could potentially reduce reliance on peak-power plants, which typically operate less efficiently.

The weight of the concrete in the spheres’ 3-meter-thick walls would be sufficient to keep the structures on the seafloor even when empty, they say. The spheres could be cast on land and then towed out to sea on a specially built barge. (No existing vessel has the capacity to deploy such a large load.)

Preliminary estimates indicate that one such sphere could be built and deployed at a cost of about $12 million, Hodder says, with costs gradually coming down with experience. This could yield an estimated storage cost of about 6 cents per kilowatt-hour — a level considered viable by the utility industry. Hundreds of spheres could be deployed as part of a far-offshore installation of hundreds of floating wind turbines, the researchers say.

In combination, floating turbines and undersea storage spheres could provide reliable, on-demand power, except during extended calm periods. Meanwhile, a siting many miles offshore would provide the benefit of stronger winds than most onshore sites, while also operating out of sight of the mainland. “It provides a lot of flexibility in siting,” Hodder, a researcher at the MIT Energy Initiative, says.

The team calculated that the optimal depth for the spheres would be about 750 meters, though as costs are reduced over time they could become cost-effective in shallower water.

Slocum and some of his students built a 30-inch-diameter prototype in 2011, which functioned well through charging and discharging cycles, demonstrating the feasibility of the idea.

The team hopes to extend its testing to a 3-meter sphere, and then scale up to a 10-meter version to be tested in an undersea environment, if funding becomes available. MIT has filed for a patent on the system.

The researchers estimate that an offshore wind farm paired with such storage spheres would use an amount of concrete comparable to that used to build the Hoover Dam — but would also supply a comparable amount of power.

While cement production is a major source of carbon-dioxide emissions, the team calculated that the concrete for these spheres could be made, in part, using large quantities of fly ash from existing coal plants — material that would otherwise be a waste product — instead of cement. The researchers calculate that over the course of a decade of construction and deployment, the spheres could use much of the fly ash produced by U.S. coal plants, and create enough capacity to supply one-third of U.S. electricity needs.

Cyber policy being made to protect online, electronic media: Inu