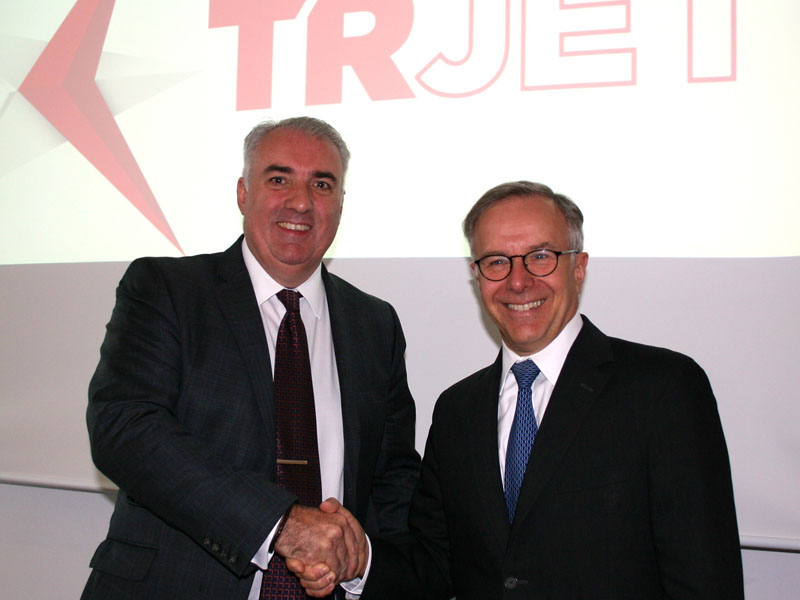 “The collaboration between TRJet and P&WC, a world-leader in the design, manufacture and service of aircraft engines, illustrates the proven technology and aviation expertise behind the 328 and 628 aircraft series,” said Cem Ugur, an executive officer for TRJet. Work on the PW306B for the TRJet 32-passenger 328 aircraft series will commence at P&WC’s Longueuil, Quebec facility in 2016, kicking off a production schedule that will culminate in production and flight of the first TRJ328™aircraft by 2019. During this time, work will also be underway on a turboprop engine for the T328 aircraft.

Design activities will be initiated in parallel for the new 628 aircraft series. This aircraft will be a clean sheet design, marking the Republic of Turkey’s first domestically-designed passenger aircraft. The first flight of the 628 series is anticipated for 2023, in honor of Turkey’s centennial. The D328 is currently certified in 85 nations around the world and is in use in countries including the U.S., Switzerland, Germany, U.K. and Denmark. The versatile and rugged 328 turboprop and jet, with its large cabin comfort, is credited within the industry as a valued, cost-effective performer.

Both SNC and P&WC believe that TRJet will meet a regional need and benefit the local economy. “Extensive market studies show that these aircraft are not only needed for Turkey’s domestic market, but there are growing regional and international demands where the sub-50-seat market is underserved,” said Dave Jackson, managing director of 328. SNC anticipates securing licensed production of such aircraft for sale in the U.S., including sales to the U.S. government.

“We are very proud to be a part of this program,” said Richard Dussault, vice president of marketing for P&WC. “We look forward to collaborating with TRJet, SNC and 328 Support Services to launch this historic project which will have a positive impact on the country’s economy and support its growing aviation industry.”

Headquartered in Ankara, Turkey, TRJet is a wholly-owned subsidiary of SNC which is supporting the Turkish Regional Aircraft Project (Project) and the commercial aviation sector. TRJet combines the legacy of two esteemed aviation companies, SNC and 328 Support Services GmbH, to create an aviation and aerospace company that merges modern German aircraft engineering and the latest industry modification standards. Making Turkey’s first regional aircraft a reality, the Project fills a niche market for direct and frequent flights between small Turkish cities which is currently not feasible using larger airplanes. TRJet also supports the growth of Turkey’s existing civil aviation industry and will help to introduce the country to the global aviation market, establishing it as an aircraft Original Equipment Manufacturer (OEM), all while contributing significantly to Turkey’s economy. For more information on TRJet, visit www.trjet.com