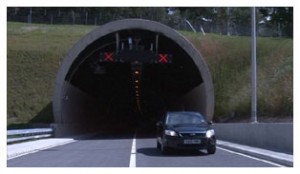 UK Transport Secretary, Philip Hammond, has officially opened the £371 million (US$608 million) A3 Hindhead Tunnel, which bring vastly improved journeys on the main route between London and Portsmouth. The 1.9km (1.2 mile) tunnel, which is the longest of its type in the UK, is part of a 6.4km (four mile) bypass of the Surrey village of Hindhead – a notorious bottleneck. The project has won awards for its innovation and its safety record, and has been delivered within budget and on schedule. Featuring state-of-the-art safety technologies, it includes the UK’s first radar-based incident detection system and 100% CCTV coverage.
“This is another one of the ‘missing links’ in Britain’s trunk road network now put in place,” said Hammond while cutting the ribbon. “For years traffic has been held up at the Hindhead crossroads, hampering the flow of goods and services along this vital artery and blighting the lives of people living in and around the village. No longer. This new road will transform journeys on the A3, improving journey times by around 20 minutes or more at busy periods, and will deliver a threefold return on investment for the economy. This cutting-edge road scheme has surpassed expectations in almost every way, and sets a new standard for how vital infrastructure improvements can be delivered in a way that not only protects but actually enhances the surrounding environment. The Highways Agency, along with its contractors Balfour Beatty, designers Mott MacDonald, and consultants Atkins, are to be congratulated on their achievement.”