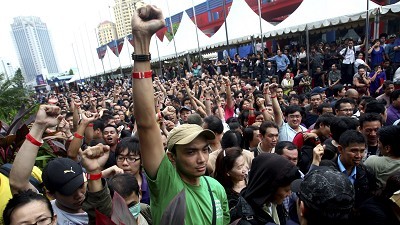 Thousands of Indonesians have jammed into an upmarket shopping mall to get hold of the first BlackBerry Bold 9790s being sold worldwide.

Fearing a riot, hundreds of police were deployed outside, tying up traffic in the heart of the capital Jakarta for hours.

With a 50% discount on the 540 US dollar (£349) smartphone for the first 1,000 buyers, queues started forming in front of the Pacific Place shopping centre on Thursday night. By daybreak, impatient shoppers started rattling the gates.

And when rumours spread that the new phones – commonly known as Bellagio – had already sold out, the crowd of 3,000 went crazy. Several people fainted in the crush.

Indonesia, a nation of 240 million people, has experienced a tech frenzy in recent years.