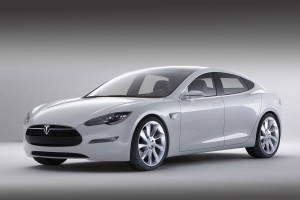 Tesla Motors has introduced the Model X, its third electric car, and like its brandmates, this one is an all-electric vehicle.

Built on the same chassis as the four-door Model S, the Model X is a hybrid — a cross between an SUV and minivan — and it has what Tesla Motors CEO Elon Musk calls “falcon wing” doors. They’re similar to the gullwing doors often seen on concept cars but rarely on actual shipping vehicles.

Musk says the advantage of those lifting doors is the ease of getting in and out of the car even when parked in a tight parking spot. And, it’s possible to stand up in the car while those doors are open making it easier to enter and exit.

In an early look given Thursday to GigaOm, Musk said this Model X vehicle will be priced similarly to the Model S, which will cost between $50,000 and $70,000. However, even though the Model X shares a chassis and drive train with the Model S, the X will have a 10% shorter range because of its extra weight.

In the mysterious online press event, the company presented a silhouette shot of the the new vehicle, along with a quote underneath from CEO Musk, “Most cars are pretty blah. This is not.”

The vehicle’s availability date wasn’t announced so far, but you’ll be able to reserve a Model X starting at noon Pacific Time on Feb. 10, 2012.

Volvo’s largest ever excavator in action

Graft reduced to great extent through reaching IT facilities to people's doorsteps: Joy