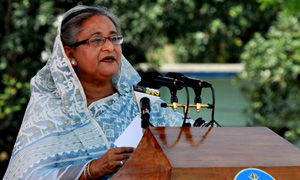 Stressing the need for reaching the benefits of science and technology to the common people, she also said suitable technologies will have to be innovated to change the days.

“We could reach to our desired goal if we could turn our huge manpower into human resources through science and technology,” she said.

The Prime Minister said this while handing over cheques among the researchers and students who obtained Bangabandhu Fellowship and the National Science and Technology (NST) Fellowship. She also distributed cheques for special grants among the scientists and researchers at the function.

The Ministry of Science and Technology arranged the function at the Osmani Memorial Hall this morning.

Ministers, parliament members, vice chancellors of different universities, academics, scientists and researchers and high civil and military officials were present on the occasion.

Sheikh Hasina expressed her firm optimism that the science and technology would bring revolutionary changes in Bangladesh’s socioeconomic condition.

Putting emphasis on more research in different issues, the Prime Minister said it could open up a new door for the country.

In this connection, she said the government is considering relaxation of age bar for the researchers who are engaged in specific research.

“We want to give scope to the researchers to complete the research so that age cannot be a bar to their research. But we won’t do it wholesale. We would only make special arrangement for those who are conducting specific research,” she said.

The Prime Minister said her government is determined to build Sonar Bangla as dreamt by Father of the Nation Bangabandhu Sheikh Mujibur Rahman keeping ahead the goals of turning Bangladesh into a technology and knowledge-based middle income country.

She mentioned that her government has been providing all kinds of assistance including necessary financial grants for development of research related to science and technology following the footprints of Bangabandhu. “This support will be increased gradually in future,” she assured.

In this connection, she requested the researchers and students to work with utmost labour and obligation so that the assistance is helpful for achieving the expected goal.

Sheikh Hasina said the Bangabandhu Fellowship on Science and ICT Project is being implemented spending Taka 86 crore in memory of the Father of the Nation keeping in consideration the issue of building a science-minded nation.

“The aim of the project is to create efficient scientists, technologists and researchers at the national level,” she said.

Besides the Bangabandhu Fellowship, she said, the National Science and Technology Fellowships are being given to MPhil, PhD and post-PhD students and researchers.

The Prime Minister said her government has modernized the education making it science-oriented to keep pace with the world. “We have taken initiatives to build modern people by introducing curriculum through giving priority to science education in all spheres,” she said

Elaborating various steps of her previous government in ensuring application of ICTs, Sheikh Hasina said, initiatives have been taken to build Digital Bangladesh before the target of 2021, while a process has begun to launch ‘Bangabandhu Satellite’, the first of its kind in the country, on the orbit.

Highlighting the success of country’s scientists and researchers, the Prime Minister mentioned that Bangladesh’s scientists decoded the genome sequence of Tosha and local varieties of jute brightening the image of the country.

Besides, she said, by using genetic engineering and biotechnology, they invented various types of paddy which are tolerant to drought.

Sheikh Hasina also eulogized the software engineers of the country, saying that their inventions have earned name and fame for the nation.

Illustrating her government’s stunning success in spreading ICT facilities up to rural level, the Prime Minister said the internet services have been expanded to the union level side by side with raising internet speed.

She said computer and mobile phones have been made available, as the government has withdrawn tax on computers and slashed cell phone call charges drastically. “Now 11 crore mobile SIM cards are being used in the country,” she mentioned.

Google may return to China with Android app shop: report