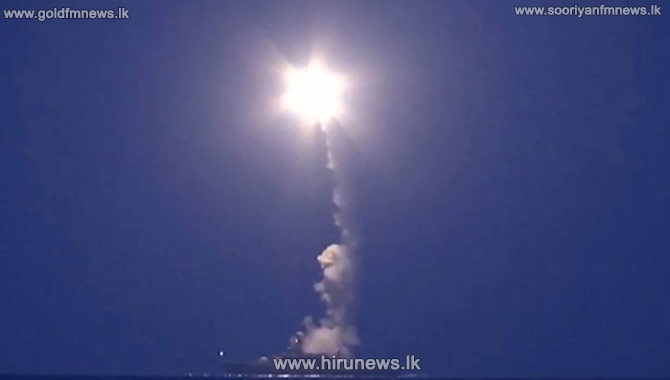 e-News® | The NEWS Company…Moscow, Oct 9, 2015 :  Four Russian cruise missiles fired at Syria from the Caspian Sea landed in Iran, unnamed US officials say. It was unclear whether the missiles caused any damage, they said. On Wednesday, Russia said it had fired 26 missiles at 11 targets in north and north-west Syria – about 1,500km (930 miles) away. On Thursday, it reiterated that all the rockets hit their targets.

The news came as Nato renewed assurances to defend its allies in view of Russia’s “escalation” in Syria. Russia’s ambassador in Ankara had earlier been summoned three times in response to recent violations of Turkey’s airspace. Turkey is a Nato member. The military alliance is also boosting its response forces to be able to deploy troops speedily.

In other developments: Russia’s defence ministry says the latest series of air strikes hit 27 targets early on Thursday – and that they all belonged to IS     US Secretary of State John Kerry tells his Russian counterpart Sergei Lavrov in a phone call that the two countries must move forward with technical talks on avoiding accidents in Syria, Ukraine’s President Petro Poroshenko tells the BBC that “Russia wants to create a belt of instability from Syria to Ukraine”

The US officials provided no details of where the missiles might have landed. Iran’s Irna news agency reported on Wednesday that an unknown flying object had crashed in the village of Ghozghapan in the Iranian province of West Azerbaijan, said to be under the missiles’ flight path. But conservative Iranian media described the reports of missiles landing in Iran as “psychological operations by the US against Moscow”.

“Since Russia began its operations in Syria, Western media and officials have launched an all-out assault against Moscow,” the Fars News Agency, thought to have close affiliations with Iran’s Revolutionary Guards, said.

“Any professional knows that during these operations we always fix the target before and after impact. All our cruise missiles hit their target,” said spokesman Gen Igor Konashenkov. The BBC’s Barbara Plett Usher in Washington says the Americans are rattled by the addition of cruise missiles to the air war over Syria, where the US and its allies are also operating. Secretary of Defence Ash Carter earlier said Russia had launched the missiles without warning, our correspondent says.

Moscow says it has been hitting positions of the so-called Islamic State (IS), and denies Western reports that Russian strikes have mainly targeted other opponents of Syrian President Bashar al-Assad. IS militants have seized swathes of territory in Syria and Iraq. The Russian air strikes had “weakened” IS, Syrian Army Chief of Staff Gen Ali Abdullah Ayoub said on Thursday, enabling the army to start a “big attack” to retake towns and villages.

Heavy fighting was reported in areas of Idlib, Hama and Latakia provinces, where a coalition of rebels – including the al-Qaeda-linked Nusra Front – operates. Government-backed troops had moved into the key Ghab plain area, the UK-based Syrian Observatory for Human Rights monitoring group said.