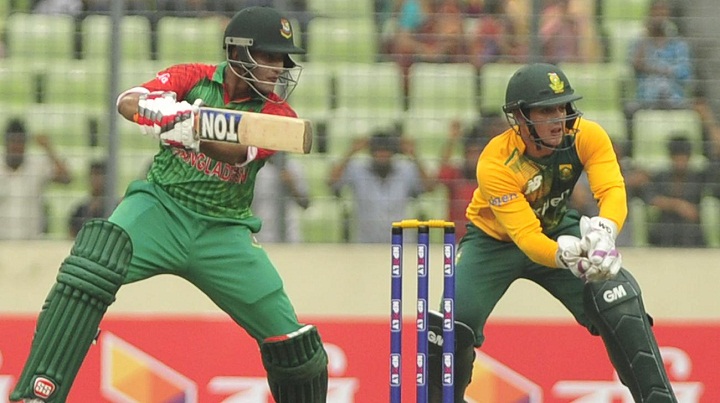 e-News® | The NEWS Company…DHAKA, July 05, 2015 : South African bowlers made things looked too easy as they dumped hosts Bangladesh by 52 runs to take 1-0 lead in the first T20i match of the National Polymar two-match T20i series held on Sunday at the Sher-e-Bangla National Cricket Stadium.

Set a healthy winning target of 149 runs saw Tigers batters found the chase too stiff, losing wickets at regular intervals and were finally bundled out for a paltry total of 96 runs in 18.5 overs. SouthAfrican bowlers made an early inroad as they lost both their openers with 13 runs on the score board. Both Tamim and Soumya Sarker threw their wicket as they unnecessarily chased two wide deliveries to provide South African bowlers with two early gifts on the platters.

The two experienced Tigers batsmen Shakib Al Hasan (26) and Mushfiqur Rahim (17) both made a promising start but failed to carry on only leaving Bangladesh in a deep trouble. The only mentionable partnership was between Shakib and Mushfiq’s 37-run for the 3rd wicket stand otherwise Tiger wickets fell like a nine pins. Debutant Liton Das (22) were the other batsman who able to reach the double digit.

JP Duminy, David Wiese and Kagiso Rabada caused the major damage for Bangladesh picking up two wickets each conceding 11, 12 and 28 runs respectively. Du Plessis of South Africa was named the player of the match for his impressive batting on the day. After the match skipper Mashrafe Mortaza said his bowlers bowled pretty well. We would have done well to restrict them to 130 but some poor fielding allowed our opponent to post near 150 mark. While batting we couldn’t build any big partnerships as our batting order looked very fragile. The wicket looked a bit slow, it was a plan [to start with the spinners] and all the bowlers bowled well. I think, our batters played too many shots, but we can fix it, it’s not too much of a worry, the way they are batting. We’ll be back in the next match.”

Earlier, South African skipper Faf Du Plessis smashed a brilliant unbeaten half century as touring South Africa labored to score 148 for 4 from their allotted 20 overs against Bangladesh. Du Plessis helped the touring side to recover from an early batting debacle with an unbeaten 79 off 61 balls, his sixth half-century in Twenty20 format, which was studded eight delightful boundaries.

The Tigers started with spin attacks from both ends and reaped instant rewards when left-arm spinner Arafat Sunny dismissed AB de Villiers in the very first over for 2. De Villiers opened the innings only the second time in his Twenty20 international career and conceded four dots before he was picked up by Mashrafee Mortaza at cover in the last ball of the over. Quinton de Kock tried to break the shackle with a six off Nasir Hossain over cover but soon became a victim of debutante Liton Das off the same bowler at point for 12.

Sunny returned for his second spell to break a 46-run third wicket  partnership between Du Plessis and JP Duminy as Nasir took a well-judged catch at the deep to dismiss the later for 18. Shakib Al Hasan trapped David Miller leg-before for one but Du Plessis added another 58 runs in an unbroken fifth wicket stand with Rilee Rossouw (31 not out) to take the visitors to a respectable total. Rossouw played 21 balls and smashed two fours and as many sixes for his cameo 31 not out. Arafat Sunny was the most successful bowler for Bangladesh taking two wickets for 29 runs.

The second and final T20i between the two sides will be played on Tuesday (July 7) at the same venue.