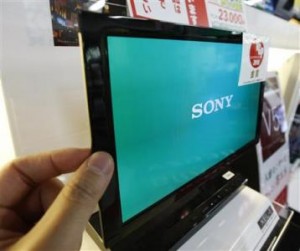 Sony Corp and Panasonic Corp are in talks to develop the technology to mass produce next-generation OLED televisions, sources close to the matter said on Tuesday, but may already be running to catch up with South Korean rivals in a technology widely seen replacing current LCD TVs.

Samsung Electronics and LG Electronics plan to sell 55-inch OLED televisions, which are as slim as 4 millimeters and consume less power and offer sharper images than liquid crystal display sets, by the year-end.

Sony pioneered the technology with the world’s first OLED TV in 2007, but halted production of the $2,000 screens three years later because of the global downturn. Sony still makes OLED screens costing as much as $26,000 for high-end customers.

Japanese firms that dominated the global TV market in the 1980s and 1990s have been battered by their aggressive Korean rivals, along with weak demand for the TVs they make and a stronger yen that makes their exports more expensive. Sony, Panasonic and Sharp Corp reported a combined net loss of more than $20 billion in the year to end-March.

Those Japanese woes coincide with a battle in the TV market between credit-card-thin organic light emitting diode (OLED) and ultra-high definition sets. Shipments of OLED TVs may grow to 2.1 million sets in 2015 from just 34,000 this year, according to research firm IHS Inc.

Mass producing affordable OLED TV screens – the technology is used on smaller smartphones and tablets – will be key to future growth, and already the Japanese may be late to the game.

“Overseas competitors have gotten a head start in this area and I feel like they’re stepping into this too late,” said Masayuki Otani, chief market analyst at Securities Japan. “There’s no question OLED TVs are going to be the mainstream. The issue is price and size of the displays.”

“Japanese makers haven’t been able to produce OLED TVs that are as large as Samsung’s … I think there’s an element of Japanese pride to this – the fact that Panasonic and Sony will work together to produce OLEDs to beat their Asian rivals. But I do have serious doubts on whether they can catch up,” he said.

Shares in Sony, which makes Bravia TVs, and Panasonic, which sells TVs under the Viera brand, fell sharply on Tuesday – with Sony down as much as 3.3 percent and Panasonic off 4 percent – continuing a slide that has seen both drop to their lowest levels in more than three decades as investors doubt they have the strategy to turn around their loss-making TV businesses.

“Both Sony and Panasonic would not be successful if they were to develop and sell OLED televisions alone. They have no choice but to find a partner,” said Makoto Kikuchi, chief executive officer at Myojo Asset Management. “It (tie-up) is a plus, but their earnings wouldn’t be rosy in the short-term because of this.”

As a way to spread development costs, Sony has been in talks with Taiwan’s AU Optronics Corp on a possible tie-up to produce OLED televisions, an industry source said last month.

“I think the (Sony-Panasonic) tie-up is to make sure they can stay ahead of the Korean rivals in terms of technology because Samsung and LG have expanded very quickly and have the capacity ready. AUO is also under financial pressure and a technological bottleneck in OLED,” said H.P. Chang, head of research at Taiwan-based LCD industry research company Witview.

“If Sony and Panasonic need to have a partner to enlarge production scale, AU is likely their only choice,” he added.

Panasonic plans to invest about 30 billion yen in its Himeji plant in western Japan for a test production line of OLED panels, the industry source said, and outgoing Panasonic President Fumio Ohtsubo said last week the company was unlikely to do all necessary investment in OLED panels on its own.

“It’s important to reduce investment risk by finding the best partner,” he told a news conference after releasing full-year results.

The Nikkei business daily reported earlier on Tuesday that Sony and Panasonic were in talks on OLED technology development.

“The content of the report is not announced by Panasonic, said Kyoko Ishii, senior coordinator of global corporate PR for Panasonic. “Panasonic will continue its development and verification of OLED based on the result of research the company has been doing at its laboratories. The timing of the commercialization of OLED has not been decided yet.”

The cost of insuring Sony’s debt against default has more than doubled in the past two months. Five-year credit default swaps have widened by more than 180 basis points to around 340 basis points – meaning it costs upwards of $340,000 a year for five years to insure $10 million of Sony’s debt. Sony has around $5.5 billion of bonds outstanding, Thomson Reuters data show.