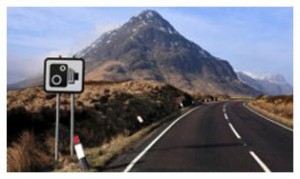 The latest figures show a reduction in road casualties at speed camera sites across Scotland. ‘Key Scottish Safety Camera Programme Statistics, 2010’, published by the country’s chief statistician, reveals that the number of people killed or seriously injured at camera sites between 2008 and 2010 was around 63% lower than in the three-year period prior to speed camera enforcement. During the pre-enforcement baseline period, an average of 341 people were killed or seriously injured per year across the camera sites, and this fell to 127 per year for 2008-2010. The figures relate to 164 fixed, 205 mobile and 41 red-light cameras located across the country.
The total number of personal injury accidents at safety camera sites fell by 47%, from an average of 1,105 per year to 586 per year. “With an average of 10 fewer accidents involving injuries every week at safety camera sites, it is clear that cameras are helping to reduce the misery caused by crashes across Scotland,” said Kathleen Braidwood, road safety officer at RoSPA (Royal Society for the Prevention of Accidents) Scotland. “The use of cameras is part of a comprehensive strategy to prevent speed-related accidents across Scotland, involving many partners and a variety of approaches. All road users have a responsibility for helping to make Scotland’s roads safer, and one of the things motorists can do is ensure they always drive according to the conditions and within the speed limit.”