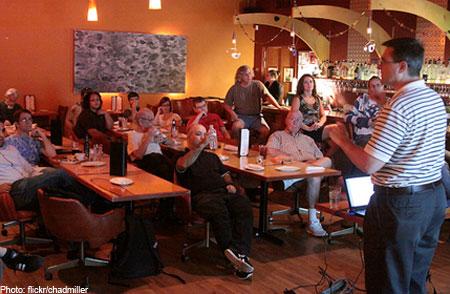 Americans may be turning away from the hard sciences at universities, but they are increasingly showing up at “science cafes” in local bars and restaurants to listen to scientific talks over a drink or a meal.

Want a beer with that biology? Or perhaps a burger with the works to complement the theory of everything?

Science cafes have sprouted in almost every state including a tapas restaurant near downtown Orlando where Sean Walsh, 27, a graphic designer, describes himself and his friends as some of the laymen in the crowd.

“We just want to learn and whatever we take in, we take in. But we’re also socializing and having a nice time,” said Walsh, who a drank beer, ate Tater Tots and learned a little about asteroids and radiation at two recent events.

Others in the crowd come with scientific credentials to hear particular scientists lecture on a narrowly focused field of interest.

But the typical participant brings at least some college-level education or at least a lively curiosity, said Edward Haddad, executive director of the Florida Academy of Sciences, which helped start up Orlando’s original cafe and organizes the events.

Haddad said the current national push to increase the number of U.S. graduates in science, technology, engineering and math, or the STEM fields, is driving up the number of science cafes.

The U.S. science cafe movement grew out of Cafe Scientifique in the United Kingdom. The first Cafe Scientifique popped up in Leeds in 1998 as a regularly scheduled event where all interested parties could participate in informal forums about the latest in science and technology.

Traditionally held in pubs and restaurants, the Cafe Scientifique would start as a short lecture, followed by a short break to re-fill glasses, and then an open discussion, according to the organization’s website.

The American movement of independent cafes is loosely organized at the sciencecafe.org website created by public broadcaster WGBH’s NOVA science program. Haddad said NOVA several years ago provided a few hundred dollars of seed money to groups around the country that wanted to start a cafe.

However, anyone with a venue, a speaker and a marketing plan can start one. On the sciencecafe.org website, an interactive map shows the location of cafes across the United States and around the globe from Islamabad, Pakistan, to Antwerp, Belgium, to the Hawaiian islands.

Some cafes have cropped up in bookstores, theaters and high school campuses.

In Viera, Florida, about 60 mostly retirees regularly pack a pizzeria to hear speakers from the well-regarded Brevard Zoo or NASA’s nearby Kennedy Space Center. In Daytona Beach, scientists from the internationally known Embry-Riddle Aeronautical University draw standing-room-only crowds at a local coffee shop.

Haddad said his hope for the cafes is to engage the public and generate excitement about the STEM fields that might filter down to the next generation.

“My feeling is STEM begins at home, with students who are being brought up by parents or relatives who have some interest in science and may encourage them to do that,” Haddad said.

Attending a cafe does not guarantee a speaker as engaging as the popular host of television programs Bill Nye the Science Guy, as Walsh learned when he got lost in the extensive jargon of one lecture.

“I don’t know that every scientist is gifted with the ability to work a crowd as well as deliver a lecture on targeted radiation therapy for tumors,” said Walsh. “If you can find one that hits both those things, they should have their own television show.”

50,000 manpower to be recruited for police force: PM