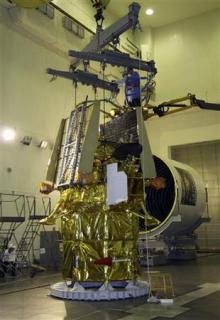 Debris from the Phobos-Grunt craft fell into the sea some 1,250 km (775 miles) west of the coastal island of Wellington, state-run RIA and Itar-Tass cited Aerospace Defense Forces spokesman Colonel Alexei Zolotukhin as saying.

The spacecraft never made it out of Earth’s orbit after its November launch on a rare interplanetary mission for Russia’s struggling space program.

It was not immediately clear whether all the parts of the craft that did not burn up in the atmosphere had fallen in the same area.

RIA cited an unnamed source in a separate Russian military branch as saying ballistics experts calculated that debris could have fallen anywhere in a broad area centred on Brazil.

Russia’s space agency Roskosmos had said debris from its doomed 14-ton craft, which included 11 tons of toxic rocket fuel, might fall in the Atlantic Ocean about midway between Brazil and West Africa.

Roskosmos and the military could not be reached for comment.

Due to constant changes in the upper atmosphere, which is strongly influenced by solar activity, the exact time and place of the probe’s return had been unknown.

The $165-million spacecraft, designed to retrieve soil samples from the Martian moon Phobos, was meant to be Russia’s first successful interplanetary mission in over two decades.

But it became stuck in orbit after a botched launch on November 9, and had since been slowly losing altitude due to gravity’s pull.

Experts said the falling space junk posed little risk, with the probe’s aluminium fuel tank expected to burn up high in the atmosphere.

“If anyone gets to see it, it will be a fabulous show. I don’t think there has been an explosion of such a large volume of fuel in space history,” Igor Marinin, editor of a space journal published by Roskosmos, said earlier Sunday.

Some 20 to 30 small pieces of debris with a total weight of 200 kg (440 lb) could hit Earth, Roskosmos said, adding that a tiny radioactive cargo of Cobalt-57 was too small to cause harm.

One component likely to survive re-entry was a small return capsule specifically designed to crash-land back on Earth in 2014, mission scientist Alexander Zakharov said.

“This is the capsule that was meant to bring back samples from Phobos, it’s disappointing,” Zakharov said. “We’re hoping Roskosmos will approve a new craft to accomplish this mission.”

In an apparent attempt to deflect blame, Russia’s space agency chief hinted last week that foreign sabotage might be the reason.

“I don’t want to blame anyone, but there are very powerful means to interfere with spacecraft today whose use cannot be ruled out,” Vladimir Popovkin told the daily Izvestia.

Stargazers watching for reentry included the Inter-Agency Space Debris Coordinating Committee, an offshoot of the United Nations Committee on the Peaceful Uses of Outer Space.

Under a U.N. space convention, Russia could be liable to pay compensation for any harm caused by bits of falling spacecraft.

In 1981, the Soviet Union paid Canada $3 million for the cost of cleaning up radioactive debris scattered in the crash of a Soviet nuclear-powered reconnaissance satellite, Kosmos 954.

When NASA’s defunct Upper Atmosphere Research Satellite fell out of orbit in September, it showered debris into the Pacific Ocean. Germany’s Rosat X-ray telescope re-entered a month later over the Bay of Bengal.

Where the Future of TV Begins : BroadcastAsia2014