Rubel Hossain down with chicken pox 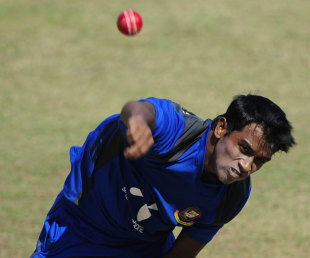 Rubel Hossain has contracted chicken pox, becoming the latest Bangladesh seamer to suffer a physical setback. He will miss the limited-overs leg of the Zimbabwe tour, after picking up the illness on Friday.

“We cannot send him back now because the disease is contagious and he has to travel by plane, plus he is weak now,” said team manager Tanjib Ahsan Saad. “But after he recovers, which is expected to be six to seven days, he will most likely travel back home.”

With Rubel out, the remaining seamers are Robiul Islam, Ziaur Rahman, Sajidul Islam and Shafiul Islam. The team management may retain Robiul for the ODIs, following his good form in the ongoing Tests.

Meanwhile, Shahriar Nafees and Enamul Haque Jr left Harare for Dhaka on Saturday evening to make way for Abdur Razzak and Shamsur Rahman, who will join the limited-overs squad.