More than 30,000 volunteers will gather at the National Parade Ground on Victory Day to form the world’s largest human flag 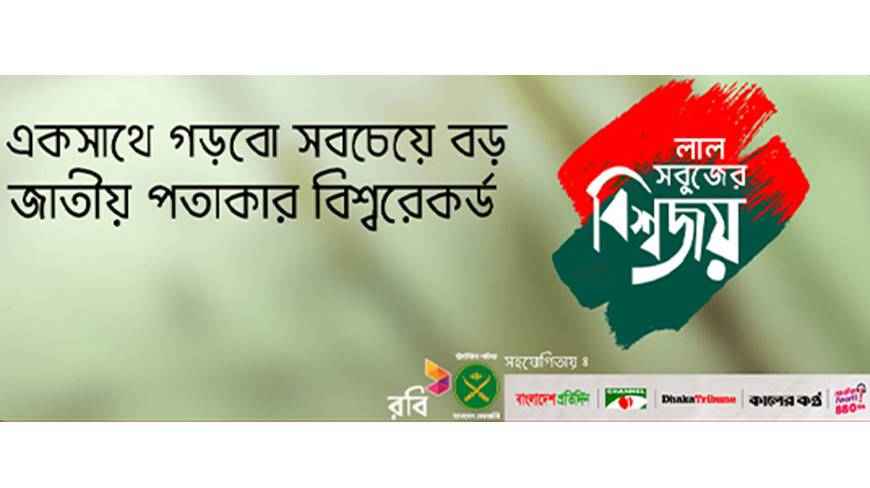 This victory day is like no other because an initiative has been taken to rekindle the sense of nationalism among the Bangladeshis by attempting the biggest ever human flag in the world.

More than 30,000 volunteers will gather at the National Parade Ground in Sher-e-Bangla Nagar on Victory Day, December 16, to form the world’s largest human flag.Bangladeshis will form the world’s largest human flag to demonstrate that the nation is united and ready to steer the country out of crisis, said Maj Gen Chowdhury Hasan Sarwardy, 9th Infantry Division & Savar Area Commander.

The announcement came at a press conference organised at a city hotel yesterday.Robi Axiata Ltd, in partnership with the Bangladesh Army, is attempting to set a new world record for the largest human flag in order to break the current Guinness World Record set by 24,200 Pakistani youths in Punjab last year.

The Dhaka Tribune is one of the media partners for the event.Maj Gen Sarwardy said: “It will be a strong image of the unity of our people; it will be recognised internationally.”Faridur Reza Sagor, managing director of Impress Telefilm Ltd, who was present at the conference, said: “People, by forming the largest human flag in the world, will express their love for the country to the world. No country like us has ever fought for its language. It is our pride and on Victory Day people will once again feel proud, by forming the largest ever human flag.”The speakers said they have been following the ratio of national flag that is mentioned in the Bangladesh gazette.

The purpose of such a move is to unite the people of country under one umbrella.The programme will start at 10am and at around 11:30am noted singer Rezwana Chowdhury Bonnya will perform.Around 12pm volunteers, mostly students from different institutions, will form the human flag, and after that noted singer Ayub Bachchu and Bappa Mazumder will lead a concert performance.A Guinness-accredited auditor will be present to oversee the attempt, and after successful completion of the event all relevant documents and images will be sent to the Guinness World Record committee for validation.

To capture the aerial view, helicopters will be used.The Organisers, Robi, have obtained permission from the defense and home ministries for the attempt, and are investing around Tk 30m. The placards have already been printed. The rehearsal will be held on December 14.Around 10,000-15,000 spectators can collect tickets for free from any Robi customer care centre. Around 1200 tickets will be available at the entry gates on Victory Day.

Approximately 1000 guests; celebrities, sportspersons, educationalists, businesspersons and other noted individuals  will be invited.Officers of the Bangladesh Navy, BDR, Police, Ansar and Biman will be deployed to strengthen the security in the area.Zafar Sobhan, editor of the Dhaka Tribune, Robi Chief Human Resource Officer, Matiul Islam Nowshad, and Muhammed Rezaul Huq, Director & COO of Radio Foorti were among those at the press conference.

Is BlackBerry 10 Better Than Galaxy S III and iPhone 5?

Even in emerging markets, Nokia's star is fading