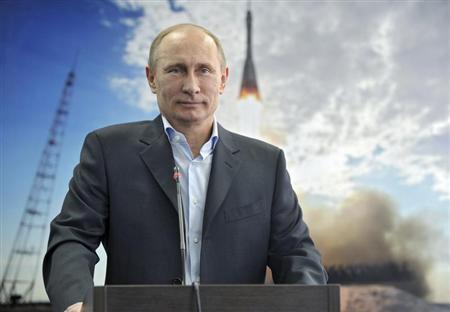 President Vladimir Putin told astronauts in orbit on Friday that Russia will send up the first manned flights from its own soil in 2018, using a new launch pad he said will help the once-pioneering space power explore deep space and the moon.

Speaking by video link with the International Space Station’s crew from the building site, Putin said it will be open to use by the United States and Europe – playing up cooperation on the anniversary of cosmonaut Yuri Gagarin’s 1961 flight, which set off the Cold War space race.

But with the image of a fiery rocket launch as a backdrop, Putin also said he wants the Vostochny Cosmodrome to help Russia catch up with other powers in exploring beyond Earth’s orbit.

“We are lagging behind the world in some areas,” Putin said on a tour of the future launch site in eastern Siberia near the border with China. “We’ve developed a noticeable gap from the leading space powers in the technologies of so-called deep space exploration.”

Russia wants Vostochny, where it hopes to exploit a new generation of rockets carrying heavier payloads, to rival its current launch site in Kazakhstan, the lease of which has been in contention since the 1991 breakup of the Soviet Union.

Since NASA retired its shuttles last year, Russian rockets blasting off from the Soviet-built Baikonur launch pad provide astronauts around the world with the only ride to the $100-billion research laboratory some 250 miles above Earth.

While NASA pays a steep fee for the trip, the upkeep and lease of the Baikonour Cosmodrome comes at Russia’s expense.

Congratulating astronauts on what is known in Russia as Space Exploration Day, Putin said: “These are not just any greetings, these are greetings from the construction site of our future.”

He said the first launch from Vostochny will be in 2015 and the first manned flight in 2018. The site, near Russia’s Pacific Coast, was chosen to allow cosmonauts to splash down on water after their mission.

“I very much hope that it will be used not only by our specialists, but by our colleagues from the United States, Europe and other countries,” he said.

“Space is a sphere of activity that allows us to forget about all the difficulties of international relations,” said Putin, who has faced criticism from the United States and Europe over human rights since his return to the Kremlin last May.

Even after the new site is built, Putin said Russia will continue to use Baikonour, which it leases at a cost of $115 million a year under a deal that expires in 2050. But he said the facility on Kazakh soil was “physically aged.”

Putin, whose ambition is to restore Moscow’s Soviet-era might, said Russia will spend 1.6 trillion roubles ($52 billion) on space exploration through 2020.

“It’s clear that in the 21st century Russia must preserve its status as a leading space power,” he said, estimating the size of the space-launch market will grow to be worth $1.5 trillion by 2030 from $300 billion-$400 billion today.

The Soviet Union got a jump on the United States in the space race when it launched the Sputnik satellite in 1957, a moon probe in 1959 and Gagarin on his 108-minute orbit in 1961. But Russia has been absent from deep space for more than 20 years.

It bungled the 2011 launch of what was meant to be post-Soviet Russia’s interplanetary debut – the Phobos-Grunt Mars moon probe – amid a string of costly botched launches.

But it signed a deal last month to join Europe on Mars sampling mission, one of a number of projects that it hopes will help it claw back its reputation in the sector.

Moscow has also revived a long-dormant quest to explore the moon. The launch of the unmanned probe, the Luna-Globe or Moon Globe, is planned to be the first from Vostochny in 2015.