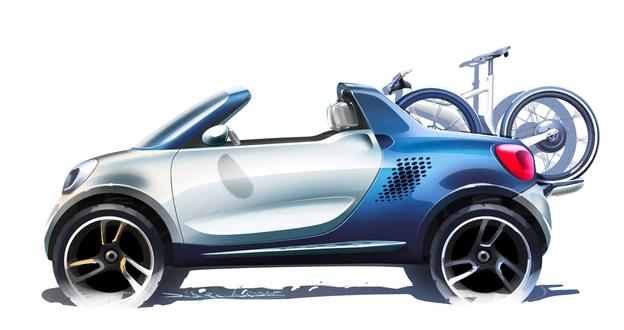 The newest concept from Smart, the compact electric car company, is a tiny, pick-up truck that is only about three-and-a-half metres long.

Debuting at Detroit’s North American International Auto Show in January, the car is almost a metre longer than the company’s leading model, the Smart fortwo. It might be a stretch to call the new concept a pick-up truck, but it does have an electrically-powered tailgate that folds down to create a 90cm-long bed.

The magneto-electric engine is powered by a lithium-ion battery and can reach speeds of up to 120kph. However, Smart has not yet released the range of this zero-emission vehicle before it needs recharging. The bed of the truck also acts as an electric charging station for Smart’s electric bikes, which can be plugged into the bed while being transported (the front wheels have to be taken off for the them to fit). So now electric-transport lovers can drive the Smart pick-up to the bike trails — or if there is too much traffic, just park somewhere and continue on via Ebike. If you’re not a biker, you can always use the cargo space for your organic groceries or compost dirt.

The truck also has tech-y add-ons like an integrated video camera that shows the road behind you and a smart phone holder instead of a rearview mirror. While Smart has not confirmed this concept car will make it to the dealerships, the car’s innovative electric motor technology will be manufactured and available in spring 2012.

Amnesty slams US & allies for weapons falling into ISIS’ hands