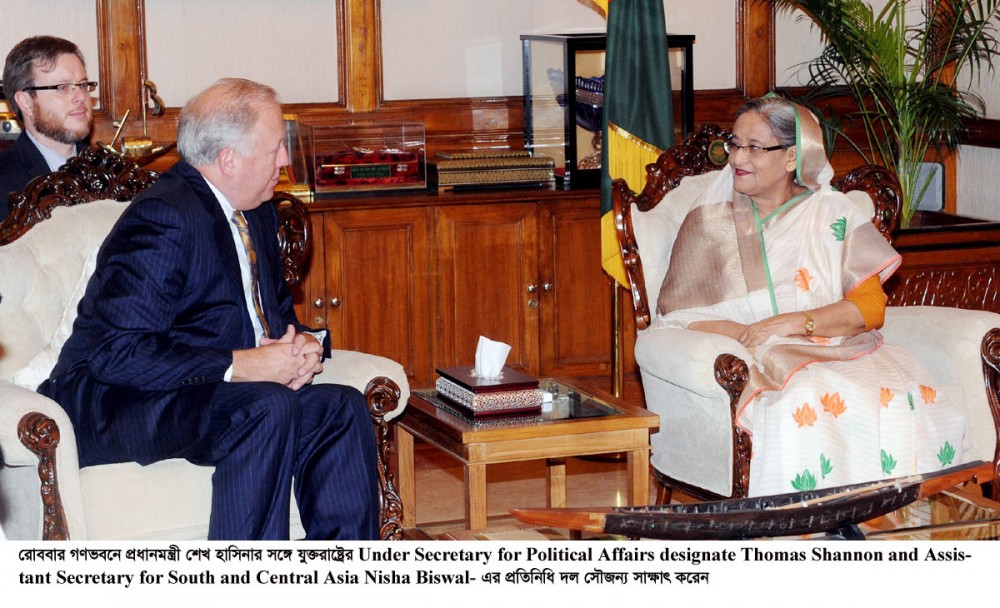 e-News® | The NEWS Company…DHAKA, Dec 13, 2015 : Prime Minister Sheikh Hasina today ruled out again the existence of militant outfit Islamic State (IS) in Bangladesh, saying that the investigations have revealed that the motivation of recent incidents in the country is primarily domestic.

“There is no (existence of the) IS in Bangladesh. But our law enforcement agencies have demonstrated considerable success in arresting some of the killers of bloggers and foreign nationals,” she said.

“So far the probes into the incidents have revealed that their motivations is primarily domestic,” Sheikh Hasina added. The Prime Minister said this when a high-level US delegation led by US Under Secretary of State for Political Affairs designate Thomas Shannon called on her at her official Ganobhaban residence here this afternoon.

While talking about terrorism, the Prime Minister said Bangladesh condemns terrorism and extremism in all its forms and manifestations in the strongest possible terms both domestically and internationally. Expressing satisfaction over the existing friendly relations between Dhaka and Washington, the Premier said Bangladesh values its relations with the US.

“The relations have set a solid structure of framework of regular annual dialogue and consultations,” she said. On the climate change issue, Sheikh Hasina said Bangladesh pledged to spend more than one percent of its GDP every year to address the impact of climate change.

“Bangladesh is committed to following the low carbon and climate resilient development path,” she said. Spelling out her government’s impressive progress in socioeconomic uplift, Sheikh Hasina said the poverty rate has been reduced to 22.4 percent from 41 percent in the last six years. Thomas Shannon, currently a Counsellor of the US Department of State, put emphasis on further strengthening cooperation between the two countries in combating terrorism and termed it (terrorism) as a “global problem” now.

He also underscored the need for deepening relations in the field of aviation security, saying that it has now turned into a very “important” (issue) in the global context. When the Prime Minister raised the issue of extradition of Bangabandhu’s killers from the US, Shannon said he would discuss the matter with his colleagues after returning home. He placed emphasis on further advancing the US-Bangladesh relations for mutual benefits of the two countries. “There are many sectors the two countries could cooperate with each other,” he said.

A World Cup in the Clouds in Qatar