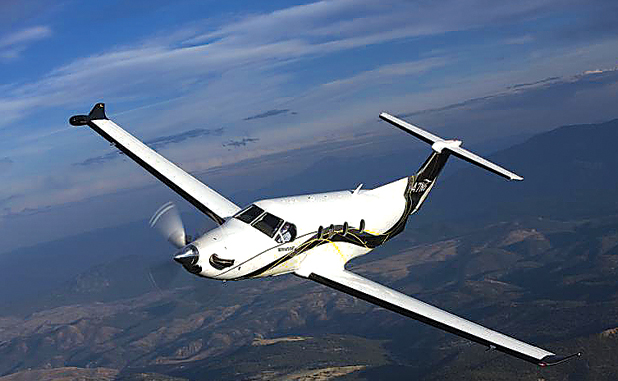 India also has about a dozen PC-12 aircraft. Pilatus has contracts in place with state-owned Hindustan Aeronautics Ltd. (HAL) and Bharat Electronics Ltd. (BEL). “Our vision is to establish through the offset policy the capability which will be a starting point for developing our position in India for the future,” he adds.

Roche also is promoting the PC-24 aircraft to India. “It is a twin-jet aircraft. We believe it will also be ideal for Indian market, though the first aircraft will roll out in production line only in 2017,” he says. “There are significant opportunities for us and we are here for the long term.”

Meanwhile, India on May 31 inducted the first set of PC-7 aircraft into the Indian air force (IAF). The Swiss firm is supplying 75 basic training PC-7 aircraft to the IAF. This marked the first formal flight of the basic trainer aircraft over the skies at the Air Force Academy in Hyderabad, in southern India.

Deliveries started last February and will continue until August 2015. The IAF is likely to receive at least two aircraft every month.

“We had signed the agreement in May last and already we received 12 aircraft. By end of this year we will have 30,” says Air Chief Marshal N.A.K. Browne.

The contract for 75 trainers, signed in May 2012, is worth more than 500 million Swiss francs ($520 million). It also covers an integrated, ground-based training system and a comprehensive logistics support package.

Pilatus has entered into a separate offset contract with the Indian government, tallying 30% of the trainer contract’s value in accordance with Indian defense procurement policy.

As part of that offset, Pilatus plans to establish in-country, depot-level maintenance capabilities, which includes the required transfer of technology to HAL to enable in-country maintenance of the aircraft throughout its service life of more than 30 years.

The PC-7 is a low-wing, tandem-seat training aircraft, capable of all basic training functions including aerobatics, instrument, tactical and night flying. “With the induction of the PC-7 Mk-II aircraft, the IAF will be able to meet the longstanding need of having a basic trainer aircraft,” says another official of the defense ministry. “We are planning to get more of these aircraft,” he adds, without giving further details.

Pilatus plans to establish a manufacturing facility in India, as the country looks at acquiring more aircraft from the Swiss aircraft maker.

The facility will initially manufacture airframes for its single-engine turboprop PC-12 aircraft.

“This will be our third support facility for PC-12 aircraft, the other two being in Portugal and Poland. It will be part of our offset commitment in India,” says Pilatus Vice President Jim Roche.

Plans call for shipping the airframes to Switzerland for final assembly.

“In the initial stage we will be manufacturing only the airframes of PC-12, which will come back to Switzerland to be assembled into final aircraft,” Roche says.

The company is currently looking for a location. Roche didn’t give a timeframe for construction.

Pilatus has so far sold 1,200 PC-12 aircraft worldwide. The nine-seater is used for surveillance, evacuation and disaster management operations.

“We see India as a large market for the future. We are in discussions with various companies on how we can expand the operations here in India to produce aircraft in India,” Roche says.