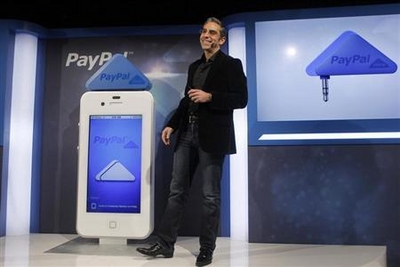 PayPal launched a European version of its PayPal Here mobile payments service for small merchants on Thursday as the online payments division of eBay Inc steps up competition with rivals, including Square Inc.

PayPal unveiled a new device, about the size of a smartphone, that allows small merchants to accept credit and debit cards under a more-stringent and complex system in Europe known as Chip and PIN.

The gadget connects to a new PayPal app that merchants can run on Apple Inc iPhones and Android-based smartphones.

PayPal said it will launch the service in the United Kingdom this summer, but plans to release it in other European countries later.

PayPal is the largest online payments business, but it is battling with a host of well-funded start-ups that are chipping away at its dominance.

Square, headed by Twitter co-founder Jack Dorsey, attracted thousands of small merchants in recent years by offering a free card reader that attaches to smartphones and handles payments for a flat 2.75 percent fee.

Last year, PayPal launched a rival service called PayPal Here in the United States and several other countries, including Japan and Australia.

The new European version of PayPal Here comes with a different device designed from scratch by the company’s U.K. team because of the more complex Chip and PIN system in the region. The approach in the United States, which relies on older magnetic stripes on cards, is considered simpler but potentially less secure.

“Trying to figure out how to make Chip and PIN to work in these devices has been hard,” said Rick Oglesby, a payments industry expert at Aite Group. “The gadgets so far have been fairly expensive and big and clunky.”

Square has yet to launch a service in Europe. It expanded into Canada last year, but that market does not require smaller merchants to use Chip and PIN technology yet, Oglesby noted.

PayPal said on Thursday that it will charge merchants for the European PayPal Here device. It did not say what the price will be, but a spokesman noted that it will be a “nominal” fee.

The company also plans to charge a per-fee transaction that will be similar to the 2.75 percent it charges small merchants in United States.

“For Chip and PIN devices, it’s not realistic to bring the cost down to zero,” Oglesby said. “That tends to temper the demand a little bit. But it also weeds out really small merchants and individuals who won’t use it as much.”