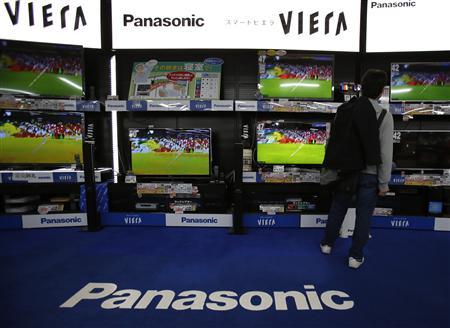 A man looks at Panasonic Corp’s Viera televisions displayed at an electronics store in Tokyo March 28, 2013.

Panasonic’s consumer electronics sales did not fall in Europe in the fiscal year just ended despite the fact that the business is struggling globally, the company’s Europe head said.

“We are doing quite well in Europe in consumer electronics,” Laurent Abadie told Reuters, adding that the company was not planning to cut its overall number of staff in Europe in the coming 12 months.

“We just closed our fiscal year at the end of March. Our turnover in consumer is not declining in Europe, despite a very strong decline of the market,” Abadie said in an interview in Vienna, where he was attending a conference.

Panasonic employs 12,000 people in Europe, where it makes about 10 percent of its sales.

Japan’s Panasonic is restructuring to cut back in consumer electronics as it is being battered by competitors, in particular Korea’s Samsung Electronics and LG Electronics.

President Kazuhiro Tsuga, who last year surprised investors by describing Panasonic as a “loser” in consumer electronics, told reporters last month that the company would expand its automotive and housing development businesses instead.

Abadie said: “Internally, that’s a question that a lot of people are asking – why Europe? We are doing quite well, basically, compared to other regions.”

He put the company’s relative success on the continent down to consumers’ still being willing to spend on high-end items despite the economic crisis – provided they were good value for money – high investments in marketing, and local design centers.

“We have a strong brand image, we have a strong partnership with the retail network, and today we are seen as a winning company and our share is growing,” he said.

Figures from market research group GfK provided by Panasonic showed Samsung with 26 percent share in consumer electronics in Europe’s top five markets in February, LG with 12 percent and Panasonic with 10.

Philips, Sony, Canon and Nikon lagged behind in single figures, according to the data.

Abadie said, however, that the share of consumer electronics in Panasonic’s overall portfolio would shrink as the market remained hard-fought and the company increased production in other areas such as energy equipment and automotive components.

He said some plants might close in Europe but others would open, including a new automotive research and development plant in the German city of Munich that should employ about 300 people and open in the next year.

“There are in-out movements but I think overall there will not be a major change,” Abadie said.