Pakistan "Robin Hood" aims to wrest election from the rich 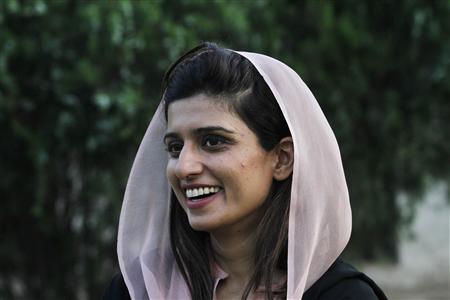 With a flick of the reins, Jamshed Dasti launched his run for Pakistan’s parliament from the back of a donkey cart, cantering through the rutted streets of his home town to file his nomination papers as supporters erupted into cheers.

With the opening act in his campaign unfolding exactly as planned, Dasti beamed the beatific smile of a man who might look like an underdog, but who is sure he has the momentum to humble his wealthy rivals at next month’s general elections.

His choice of transport was no accident: Dasti wants to persuade poor voters that Muzaffargarh, a farming district in Punjab province long ruled by a Pajero-driving, land-owning aristocracy, is about to change forever.

For his biggest rivals are none other than the Khar dynasty, which has wielded huge influence in the district for decades, and whose most famous heiress, Hina Rabbani Khar, was foreign minister until last month.

“Because of me, people have realized they can have a better life,” Dasti told Reuters. “Their poor neighbor is now running for elections against the lords of a vast kingdom. How can this not give them hope?”

The son of an illiterate laborer and part-time wrestler, Dasti is a rare example of how a man of modest means can mount a credible challenge to a patronage system prevalent in Punjab where the landed elite can perpetuate their grip on power by intimidating tenants or buying votes with bribes.

His campaign feeds a broader hope that the May elections – against a backdrop of Taliban attacks, record sectarian unrest, chronic power cuts and a near-failed economy – can boost Pakistan’s fraught experiment with democracy by proving that voters in at least some areas have a chance to elect somebody not much different to themselves.

Unlike some would-be giant-killers who have little hope at the polls, which will mark Pakistan’s first transition between civilian-led governments, Dasti is no rank outsider.

After years working as a community volunteer, he was elected to the local council before winning a seat in the National Assembly at the last elections in 2008 on a ticket for President Asif Ali Zardari’s Pakistan People’s Party.

This time, as an independent, he will run for his own constituency and a neighboring constituency that places him on a collision course with Ghulam Rabbani Khar, a prominent land owner and Hina Rabbani Khar’s father.

While the Khars may have a fight on their hands, Hina Rabbani Khar believes Dasti’s philanthropy is overblown.

“People call him Robin Hood but things really aren’t that simple,” Khar said with a wry smile at her family estate in the region of rippling wheat fields and cotton plantations.

Dasti appeared to relish his role as an underdog this month when he spent a week in jail over allegations he had submitted a fake degree certificate in his nomination papers. The charges were later withdrawn.

“When I was growing up and began to understand how the system worked, I promised that as surely as I had drunk my mother’s milk, I would beat this system,” Dasti told Reuters in the superintendent’s office at the jail in the nearby city of Multan, before being led back to his cell.

But the disillusionment with land owners in Muzaffargarh notwithstanding, Khar is herself admired in Pakistan for breaking the patriarchal mould of many landed families who would never contemplate allowing a daughter her advanced education or to play such a public role on the global stage.

With the majority of Pakistan’s electorate living in the countryside, the outcome of the polls in Punjab, Pakistan’s most populous province and its political heartland, will undoubtedly be shaped by big, land-owning families.

But Dasti’s popularity suggests that the dynamic may be in flux as Pakistan becomes accustomed to holding regular elections and the military, which has interrupted politics in the past, remains in its barracks.

As a student, Dasti, who enjoys reciting poetry inspired by the Marxist philosophy of class struggle, published a weekly newsletter, garnishing its smudged pages with editorials against feudalism. He went door to door collecting donations and started Muzaffargarh’s first free ambulance service. People nicknamed him “Mr 15” – after the police emergency telephone number.

Even when he won a National Assembly seat, he continued to work one 15-hour shift a week as an unpaid driver for a free bus service he started.

“He comes to the stop at six in the morning and sits down with the drivers for breakfast,” said Mohammad Sharif, a barber. “Have you seen anything like this: a member of the National Assembly who drives a bus?”

When Pakistan was ravaged by floods in 2010, Dasti cemented his popularity by accusing land owners of using their influence over irrigation officials to divert the water to spare their land and submerge peasant plots.

His campaign strikes a particular chord in a country where the average legislator has assets of $800,000, but where almost 70 per cent of them did not file tax returns last year, according the Center for Investigative Reporting in Pakistan.

Dasti too is shadowed by controversy. Critics say he appears to have become wealthier since winning the National Assembly seat and question how he pays for the fuel that runs his buses. But he is judged by most for his work in the community.

“You can call Dasti at 1 a.m. and he will get on a motor bike to help you,” said Mohammad Nawaz Gul, a vegetable seller. “I’ve never even seen Hina’s face.”

So confident is Dasti of victory that he left the PPP in March to run as an independent, reluctant to remain in a party in which his rivals – the Khars – are such prominent stalwarts.

Hina Rabbani Khar’s imposing house lies at the end of a tree-lined approach road through the family’s 1,500-acre estate. On the manicured lawns, Khar’s nieces and nephews joined a cricket game with village children while her two daughters played with pet rabbits as waiters hovered.

Khar said her family had made a big contribution to the area by building a free school for girls, introducing more efficient farming techniques and treating workers on its farms fairly.

“Dasti couldn’t appear big until he created an enemy,” Khar said. “We don’t have serfs working for us. We are professional farmers and educated people.”

Khar said Muzaffargarh could no longer be described in terms of peasants’ servitude to land owners who control vote banks.

“Because of the media and the practice of democracy, people’s lives and awareness have changed in the last decade. Anyone who tells you people are being treated like slaves and intimidated for votes is lying.”

But Dasti insists that pent-up frustration over the gulf between the haves and have-nots will ride him to victory in May.

Lying at the end of a narrow lane, the small family home where he lives with his mother symbolizes his everyman appeal.

“The door of this little house is always open,” Dasti’s sister, Hafeez Bibi, said. “We are not like those who wash their hands after touching a poor farmer.”

AOL Instant Messenger is shutting down on December 15th