Posted By: RAJOWAN Son: February 24, 2012 11:30 pmIn: Ecology & Biodiversity, Environment, Global News, National News
Print Email
Off and on we used to say that Bangladeshis a country of rivers. Yes, this is absolutely right because more than 700 rivers and rivulets cris-crossed the country before reaching theBay of Bengal. We feel proud that our Ganges-Brahmaputra-Meghna (GBM) river systems are one of the largest river systems on Earth. Our history, culture, ecology and economy are centered on the river runs through our land. Despite the fact, do we really feel, mean and act accordingly? 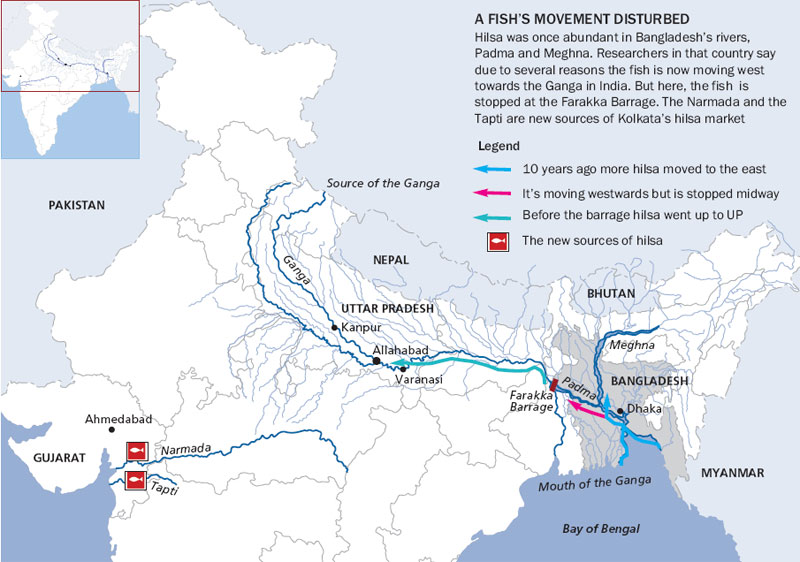 The answer is to some extent negative! We do construct unplanned barrages on it, we divert water at upstream, we dump all waste materials, whatsoever devil things else and we pollute unimaginably the rivers in such a way that we got victims of cholera, diarrhoea and other waterborne diseases out of those erroneous acts.  Nowadays we used to turn back ourselves not to see the ugly faces of rivers and clip our noses from the bad odor of the river waters.

We are happy to made roads by closing all natural flow of the vast rivers networks. Literally, we close the veins and arteries of the river systems which resulted in heart block. We built Railways, Highways, Link road, Bypass, Feeder road, village roads by courtesy of different mega projects to ease our terrestrial movement. All these structures and embankments are ceasing free-flow of river water to its massive network of wetlands (Beel– Baor, Haor- Jheel, Khala –khando and village ponds). This resulted in water-logging, drying up of wetlands, destruction of fish migration path, erosion of homesteads and loss of hundreds of aquatic flora and fauna.

We the present  generation is not ashamed… how are  we damaging our beauty and bounty of rivers?, Or even we forgot how our river loving talents by writing poems on rivers richness got awarded even the novel prize like great  poets Rabindrnath Tagore , Jibananondo Das and Govindo Chandra Das .

We in naked eye see water in the rivers as a simple liquid but we do not value the resources in it. These are the huge biodiversity which varies from zoo plankton-phytoplankton to Ganges Dolphin. The enormous fisheries assets(450 species), massive silt load for agriculture,  bulk sands for construction of buildings, habitat of turtles, waterbirds, grass, reeds, swamp forest, mangroves, soil for mud potteries, navigation route, pollution abatement,  hydro power… these are  a few of uncountable list of  contributions to our economy in gross accounts. Other values of rivers as environmental attributes and ecosystem services had never been taken into consideration in national planning for resources management.

Only billions of dollars (loan –money) we throw directly to the rivers at both Sirajganj and Chandpur in the name of so-called flood control… a never ending story.  In the name of pre- monsoon crop protection and dry season irrigation a huge amount expended from the house of national revenue and foreign loan. But the natural biomass and other wild cultivar/ crop genome –based agriculture was denied all the times.  All the unscientific water structures in most cases those are borrowed from abroad and had never been considered hydrological implication and even the local ecological and environmental consequences… are utterly failed and created ecological disaster. All those activities resulted into mono-culture aquaculture (Catfish and few exotic fishes) and monoculture agricultures (IRRI). Soil fertility gone down to a greater extent, soil became polluted by the use of excess chemical fertilizer, and uncontrolled use of pesticides/preservatives. All together these practices damaged the natural biological pest-control systems of our paddy fields.Pestproliferations increased in manifold and in some cases chemicals became resistant to the pest.

Absence of far-sightedness, lack in Ecological Impact Evaluation ( EIE), unplanned dams/dykes and huge water withdrawals and inadequate address to trans-boundary waters leads to drying up of nearly half our rivers.

History of this country is mainly focused on the remnant physical structures and artifacts of stones, bricks and visual matters.  The history which are preserved in our livelihoods and the riverine life style we have viz; Pala, Rajbansi, Koivarta, Malo, Mog, Rakhain, Kumar, Kamar, Bede, Maji-malla and Char dwellers those who represents the riverine living history. All these endemic community are being retaining the river culture and heritage in their life-style in various forms. Mentionworthy some of them are as follows.

The past, present, and future of Bangladesh and its people’s livelihoods are intimately connected to its relationship with River and wetlands.  More than 80% of the country’s total area consists of alluvial plains, crisscrossed by a complex network of rivers and their tributaries.  Floodplains, beels (low-lying depressions in the floodplain), haor (deep depression inland sea) and baors (oxbow lakes) represent the inland freshwater wetlands. Over a third of Bangladesh could be termed as wetlands, considering rivers, estuaries, mangroves, floodplains, beels, baors and haor.

There is a national consensus and feelings of the people ofBangladeshthat our river is our lifeline and that’s the reason why we need to protect the river biota by all of our means. These are reflected in our Water Policies, National Conservation Strategies, National Environment Management Action Plan, National Fisheries Policy, National Agenda-21 and National Biodiversity Strategy and Action Plan.

Considering the above mentioned facet of our river, let us respect our river heritage by establishing at least a part of the vast stretch of   rivers as “River Heritage Protected Area” to save our vulnerable river biota.

A  Padma River Sanctuary near to the   proposed Padma bridge site might be the “River Heritage Center of Global Excellence.

As an annex of the mega project “ Padma Bridge”- a part of the river around the bridge  at both upstream and downstream could be selected and managed as river sanctuary (approx.100 sq. Km).

The goal is to protect and enhance the heritage of river biodiversity. In addition river nature tourism could be sources of recreation and employment generation to the people affected by the bridge construction.

Biodiversity components which should be taken care of are:

Objectives of the programme could be as follows:

This is our moral obligation to keep safe river heritage for the future generation.