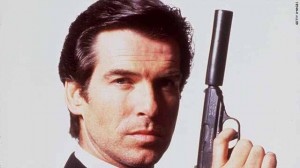 Pierce Brosnan played James Bond in the "GoldenEye" movie, but Activision is looking to refresh the story.

Activision is reloading the golden gun to take another shot at reviving a James Bond video game relic.

The game publisher plans to unveil a new 007 shooter based on the 16-year-old Pierce Brosnan flick, “GoldenEye,” at a news conference later this month, said a spokeswoman helping organize the Activision event.

The formal announcement is to take place on July 20 in San Diego at the annual Comic-Con expo. There, Activision will also show upcoming games in the “Spider-Man” and “X-Men” series.

The next Bond film, which is codenamed Bond 23, is scheduled to open in theaters on November 9, 2012.

“GoldenEye” was neither the highest grossing nor the most memorable Bond movie. But the “GoldenEye 007” game resonates with many people, even today.

In the late ’90s, the four-player shooting game was part of a nightly ritual at many college dormitories and after-school meet-ups.

Rare, which created “Donkey Kong Country” and was later acquired by Microsoft, developed the cult classic, and Nintendo published it exclusively for the Nintendo 64 console.

Rare’s and Nintendo’s divorce, along with Activision becoming the exclusive rights holder to develop Bond games, has spun an elaborate web that has left the original “GoldenEye 007” landlocked. Nintendo and Microsoft have been unable to come to terms on how to redistribute the game.

But the “GoldenEye” name, story and characters hold a special place in many gamers’ hearts. Seeing that opportunity, Activision remade the game and released “007: GoldenEye” for Nintendo’s Wii in November.

The Wii is not typically associated with first-person shooter games, and the “GoldenEye” reboot didn’t necessarily break that mold. But Eurocom has said it was satisfied with the sales.

Treyarch developed a recent Bond game, based on the “Quantum of Solace” film. Most recently, it made “Call of Duty: Black Ops.” Treyarch was not tapped to make the upcoming “Call of Duty: Modern Warfare 3,” and it has not said what its next project will be.

Game industry watchers suggest the new “GoldenEye” will be released on the Xbox 360 and PlayStation 3, two systems where shooting games have thrived.