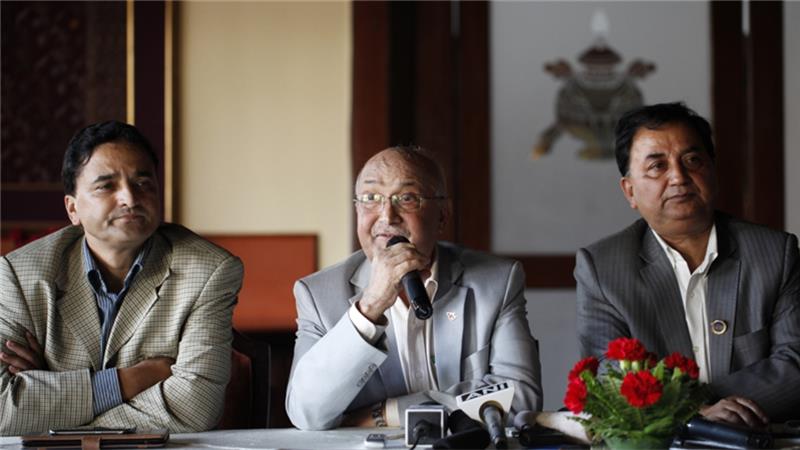 KP Oli, centre, who is expected to become Nepal’s next prime minister, is seen as a divisive figure

e-News® | The NEWS Company…Nepal, Oct 10, 2015 : Nepali Congress leader to challenge Communist party leader KP Oli, after parties failed to pick consensus candidate. in a surprise move, Nepal’s Prime Minister Sushil Koirala has filed his nomination for re-election, a day before the parliament of the troubled Himalayan nation is expected to elect a new prime minister.

Koirala formally resigned from his post on Saturday, honouring an earlier pledge to step down from his post once the country’s new constitution was adopted. The decision by the leader of the Nepali Congress (NC) party to seek re-election has drawn criticism from a section of the party, with senior leader Purna Bahadur Khadka announcing his resignation from his post while youth leader Gagan Thapa saying the decision will be “detrimental to the party”.

The leader of the Communist Party of Nepal (Unified Marxist-Leninist), KP Sharma Oli, has already thrown his hat in the ring for the prime minister’s post. “So far, Koirala and Oli have filed their candidacy for the post of the prime minister,” Sudarshan Kuinkel, deputy spokesman for the parliament secretariat, told #thenewscompany. After the adoption of the constitution last month, President Ram Baran Yadav had asked the political parties to select a consensus candidate, but the parties failed to reach an agreement by Thursday’s deadline.

Oli, who is being backed by the Unified Communist Party of Nepal (Maoist) and several other parties, is expected to win Sunday’s vote to become the Himalayan nation’s next leader amid widespread agitation in the southern plains. The political wrangling means that the huge task of recontruction in areas devastated by April’s deadly earthquake has remained on the backburner. If neither of the candidates is able to secure a simple majority, the speaker will set a date for a further election. The drafting of a new constitution marked the final stage in a peace process that began when Maoist rebels laid down their arms in 2006 after a decade-long rebellion.

However, bitter disputes over its provisions have sparked violent protests and a blockade of a key trade route in the southern parts of the country bordering India that has forced nationwide fuel rationing. More than 40 people have been killed in clashes between police and protesters representing ethnic minorities, including the Madhesi and Tharu communities, who say a new federal structure laid out in the constitution will leave them under-represented in the national parliament.