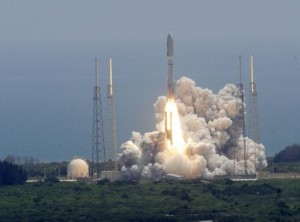 An Atlas 5 rocket launches at Cape Canaveral, Florida, carrying the Juno spacecraft on a mission to the planet Jupiter.

NASA on Friday launched the billion-dollar solar-powered spacecraft Juno on a five-year journey to Jupiter aiming to discover what makes up the solar system’s biggest planet.

The unmanned satellite observatory was propelled into space aboard a 197-foot (60-meter) tall Atlas V rocket, blasting off from the Cape Canaveral Air Force Station in Florida at 12:25 pm (1625 GMT).

“Ignition and liftoff on the Atlas V with Juno on a trek to Jupiter, a planetary piece of the puzzle on the beginning of our solar system,” said a NASA television commentator.

Some 53 minutes later Juno separated from its carrier rocket, heading off solo into space.

The launch of Juno showed “NASA is still open for business and leading the world in space exploration,” said NASA chief Charles Bolden, just over two weeks after the last ever shuttle flight landed back on Earth and the program was mothballed.

“The largest planet in our neighborhood is about to reveal its secrets, and everything Juno finds will help us understand more about the origins and evolution of our solar system. This is exciting stuff,” Bolden wrote on the NASA website.

Once it arrives in July 2016, the spacecraft will orbit the poles of the gas giant, which has more than twice the mass of all planets in the solar system combined and is believed to be the first planet that took shape around the Sun.

Named after the wife of the Roman god Jupiter, the $1.1 billion spacecraft is NASA’s first mission there since it launched Galileo in 1989, and it aims for 30 orbits over a period of one year.

Juno will get closer to Jupiter than any other NASA spacecraft and will be the first to undertake a polar orbit of the planet, said Scott Bolton, Juno principal investigator and scientist at the Southwest Research Institute in San Antonio, Texas.

“One of the primary goals of Juno…. is (probing) the origin of Jupiter and the origin of our solar system,” Bolton said Friday just before the launch.

“Juno is set up to learn about that early part of the solar system and learn how Jupiter formed, and by measuring the ingredients we are really looking for the recipe of planet formation.” 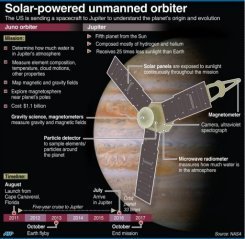 NASA’s Galileo, an orbiter and probe that launched 22 years ago, entered the planet’s orbit in 1995 and plunged into Jupiter in 2003, ending its life.

Other NASA spacecraft — including Voyager 1 and 2, Ulysses and New Horizons — have done flybys of the fifth planet from the Sun.

Juno will spend the first two years of its mission going around the Sun, then will return for a flyby of Earth which will give a gravitational boost to accelerate Juno on a three-year path toward Jupiter.

When it gets there, Juno — orbiting around 5,000 kilometers (3,100 miles) above the gas giant — will make use of a series of instruments, some of which were provided by European space agency partners Italy, Belgium, France and Denmark, to learn about the workings of the planet and what is inside.

Two key experiments will gauge how much water is in Jupiter and whether the planet “has a core of heavy elements at the center, or whether it is just gas all the way down,” Bolton said at a press briefing last week.

Scientists also hope to learn more about Jupiter’s magnetic fields and its Great Red Spot, a storm that has been raging for more than 300 years.

“One of the fundamental questions is how deep are the roots to that red spot? How does it maintain itself for so long?” said Bolton.

Juno is carrying a few toys as part of a campaign to raise awareness among young people about math and science.

Three 1.5 inch figurines made by LEGO toys are on board — a likeness of the Italian astronomer Galileo Galilei who discovered four of Jupiter’s moons, the Roman god Jupiter and his wife Juno.

Back in 2003, when plans for Juno were being crafted, NASA briefly considered using some sort of nuclear fuel to power the spacecraft, but engineers decided it would be quicker and less risky to go with solar.

Juno is part of a series of new planetary science missions, to be followed by Grail, which is headed to the moon in September, and the Mars Science Laboratory set to take off in November.

“These missions are designed to tackle some of the toughest questions in planetary science, all about our origin and the evolution of the solar system,” said Jim Green, director of the planetary science division at NASA headquarters in Washington.