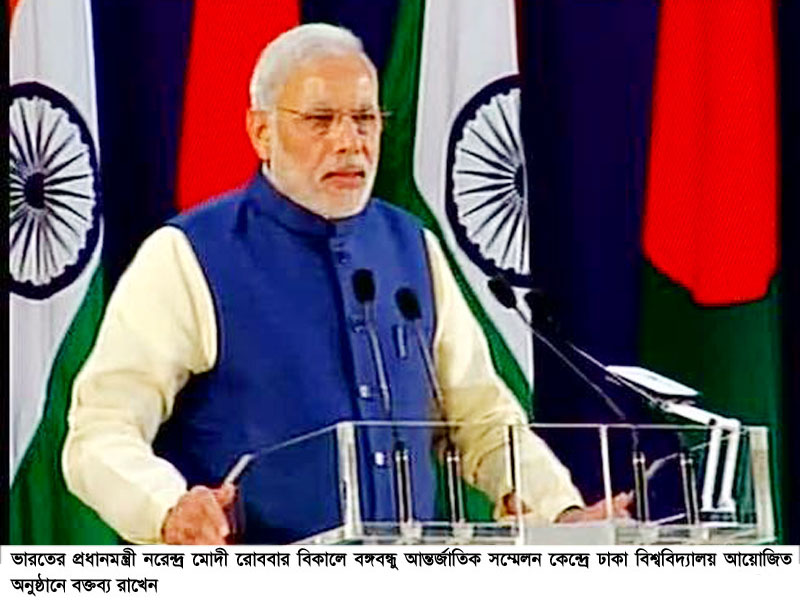 e-News® | The NEWS Company…DHAKA, June 8, 2015 : Visiting Indian Prime Minister Narendra Modi today ended his two-day maiden Bangladesh visit wishing common prosperity and future while identifying progress in sub-regional cooperation as a major achievement of his tour. “I would like to tell you, we are along with you and alongside you . . . the dream I have for India, the same I have for Bangladesh,” he told a public lecture for select gathering hosted by Dhaka University at the Bangabandhu International Conference Centre in collaboration with the Indian High Commission in Dhaka.

He said that the “unity” set by the common history and geography and culture was the strength of the bilateral ties saying “can anyone could ever think that one man could be the composer of national anthems of two countries . . . here lies the strength of our unity”. Eminent personalities representing different sections of society and foreign diplomats rallied at BICC when the 65-year Indian leader touched upon most issues of bilateral, regional and international interests during his more than one hour lecture. Dhaka University vice chancellor Professor AAMS Arefin Siddique introduced the Indian premier to the audience while the recipient of India’s Padma Bushan Professor Emeritus Anisuzzaman and Padma Sri Jana Das joined the function as special guests alongwith Finance Minister AMA Muhith and government leaders. Modi said what the South Asian grouping of SAARC could not yield the expected development for regional connectivity, the two countries made a great achievement towards that end on sub-regional basis involving the common neighbours of Nepal and Bhutan.

“Everybody may not move together, is it not an achievement that some of us could move together . . . now even the decision has been taken for connectivity in sea routes as well apart from road, railway and river communications . . . we are proud for the great achievement,” he said. The Indian premier said synchronization of his thoughts with that of his Bangladesh counterpart Sheikh Hasina to be a catalyst for joint initiatives for development saying while ” I say, thrive, thrive and thrive, she says development, development and development”.

Modi said he believed in synchronized and continued development of the two countries were essential also to evade crisis in bilateral ties. “I tell you , from the core of my heart, I became very happy” when a Chinese businessman pointed him out that Bangladesh was doing much better than India in the RMG sector during his recent Beijing visit. He particularly referred to joint initiatives against terrorism to be an excellent example of bilateral cooperation appreciating his counterpart for “her ‘zero’ tolerance” against the menace placing the bilateral ties to a new trajectory.

“They (terrorists) created many problems for the world claiming a huge number of lives, but what they gave in return? . . . they don’t have any ideology or goal (and) so all the humanitarian nations must join hands (against them),” Modi said.

Referring to the Teesta issue, he reaffirmed his firm conviction to resolve the crisis managing the India’s West Bengal state saying in a lighter vein “when I am with you, I need to be by the (West Bengal) state also”. The Indian premier reviewed India’s role for the world peace since the World War 1 saying it never fought a war for grabbing others land, but still could not get its recognition in the world arena while he sought Dhaka’s support for its permanent membership in the UN Security Council also for the reform of the UN.

“The world has changed a lot, from the era of the industrial revolution to the current day ICT revolution, but the UN system has not,” he said emphasing the need for it for greater engagement of the developing nations like Bangladesh. “Birds, rivers and winds do not need any visa . . . not politics could be there as far as these issues are concerned,” he said referring to the common streams as issues of humanitarian concerns. Modi referred to his historic emotional ties with Bangladesh since his youth recalling that during the 1971 Liberation War, he for the first time came to Delhi from his home state Gujarat to join Satyagraha launched by Jana Sangh to support Bangladeshi freedom fighters in 1971.

“God knows, that attachment might have brought me here today,” he said and acknowledged the honour he received from Bangladesh’s 1971 veteran President Abdul Hamid, his counterpart Sheikh Hasina and people of the country. The Indian premier said following the landmark of ratification of the LBA linking the two countries heart to heart, his visit to Bangladesh would now be the issue of “post mortem” of the world community. “Not the Asia alone, the whole world will post mortem it,” the Indian premier said.

He said he believed the unity of not only of Bangladesh and India, but also the other countries of the region saying even before the installation of his government last year, he invited “with honour” all SAARC leaders to signal how much emphasis he laid on regional integrity for common benefits. “If we can get united, the world will understand they (we) can move with their own strength,” Modi said.