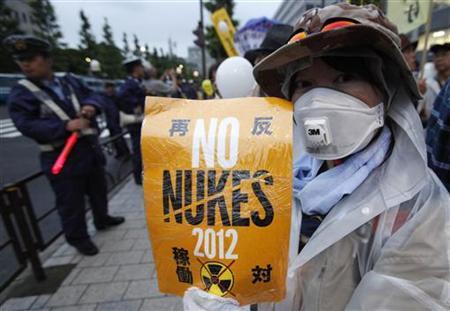 But it is uncertain whether confidence can be restored with public feeling running high against the “nuclear village” — industry officials, politicians and utility operators seen as failing to avert the disaster.

The Fukushima accident – meltdowns linked to the March 2011 earthquake and tsunami that crippled the plant – has rejuvenated the anti-nuclear movement. A rally last week drew 100,000 protesters.

The government hopes that the new safety body, to be launched in September, will instill more confidence than two current regulatory bodies, both heavily criticized for their cozy ties with the power industry.

Tanaka, 67, a former deputy head of the Cabinet Office’s Atomic Energy Commission, was nominated for the new safety watchdog along with four other candidates.

“We’re in an extremely severe situation as to whether we can regain public confidence in the state and the administration,” Environment Minister Goshi Hosono told reporters after the government put forward the nominations to parliament.

“We have selected suitable persons from the standpoint that those who have not learned a lesson from Fukushima are not qualified to be involved in nuclear energy administration.”

Japan restarted two reactors this month to avoid a potential blackout in the summer — all of Japan’s 50 operating nuclear reactors had been taken offline for checks after the disaster.

But reconnecting even two reactors to the power grid has consolidated anti-nuclear feeling.

The nominations were called off a week ago when media leaks prompted lawmakers to seek government clarification.

The nominees — including a reactor expert, a radiology expert, a former ambassador to the United Nations and a seismologist — must be approved by parliament.

In principle, lawmakers refuse to consider nominations to key posts if they have been leaked to the media, but they exempted the nominations from the “no leak” rule this time, given the limited pool of qualified candidates.

Experts say the safety commission’s credibility will hinge on its members, but that it is hard to find people with expertise who are not clearly linked to either the nuclear industry or the opposing camp.

Critics see some nominees, including Tanaka, as closely linked to the “nuclear village”. But Environment Minister Hosono defended his nomination, saying Tanaka had already offered an apology for the disaster and had contributed to decontamination efforts in his home region.

Two inquiries into the disaster, one commissioned by the government and another by parliament, delivered a damning assessment of how regulators, Fukushima’s operator and government officials handled the crisis.

The parliamentary probe accused the regulators and Tokyo Electric Power Co., Fukushima’s operator, of collusion, referring to the worst nuclear accident since Chernobyl as a “man-made” disaster.