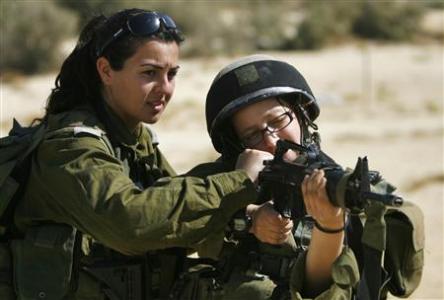 Breaking cover from a lookout point disguised as a dune, four soldiers storm into the open, ploughing through the sand with rifles aloft. Their battle cries are like seagull calls, and from under their helmets, ponytails flap.

Team Mor is a spotter unit on Israel’s fenced-off border with Egypt, deployed at night to intercept would-be infiltrators from the lawless Sinai desert. Like dozens of others along the tense divide, it is all-female.

Any trespass in the Sinai would outrage Egyptians, many of whom resent having signed a peace treaty with Israel that largely demilitarized the peninsula in 1979. That makes spotting Islamist guerrillas or illegal African migrants well before they reach the razor-wire border fence a strategic priority for Israel.

While the Israeli conscript military’s gender egalitarianism is well known, when it comes to keeping the peace with Egypt over the border, women are valued perhaps even more than their male counterparts.

“It is no accident that so many women are in field intelligence – with all due respect to the men, women bring a special capability,” said Major Oshrat Bachar, the chief of operations for Sayarim.

She would not elaborate, but retired brigadier-general Ruth Yaron, a former chief Israeli military spokesperson, voiced her opinion that at draft age, women tended to be better suited for the patient vigilance required of surveillance.

“This is a role that multi-tasks between discipline, pro-activeness and long-term focus, attributes that are often less developed among 18- or 19-year-old male soldiers,” Yaron said.

The numbers suggest Yaron and Bachar are not alone in their thinking. Women make up 55 percent of Israel’s field intelligence corps, compared to just 33 percent of the armed forces overall.

Uniquely for Israel’s combat units, which are 96 percent male, the field intelligence corps has an all-woman infantry surveillance company – around 70 troops, including Team Mor – whose members sign up for an extra year of service in addition to the compulsory two.

Thousands of female sentinels monitor Israel’s frontier video-feeds around the clock from hi-tech bunkers. Outside Gaza, some of the screens feature crosshairs linked to heavy machine-guns, allowing the women to remote-fire at Palestinian raiders.

David Tzur, a former general who runs the Israel Intelligence Heritage and Commemoration Centre, said the remote system, known as “Ro’ah-Yorah” or “Sees-Shoots”, takes the feminine form in Hebrew in a nod to the gender of its operators.

“The girls were not happy with the original masculine naming,” said Tzur.

In the camouflaged crawl spaces that serve as border positions, four- to six-soldier teams can spend several days almost immobile in the blazing heat, peering through powerful binoculars and radioing in reports of suspect movements.

“They have endurance and concentration,” Tzur said.

“The intelligence services were among the first in Israel to appreciate this, and to incorporate female staff accordingly.”

The role of women in intelligence services is a hot topic these days thanks to a new Hollywood movie about the hunt for Osama bin Laden, “Zero Dark Thirty”, and the success of the “Homeland” television series, both of which feature female CIA officers as their lead characters. A book by a former U.S. Navy SEAL who took part in the actual raid that killed bin Laden in 2011 also credits a female analyst for finding their target.

Richard Kemp, a retired British army colonel and veteran of the Afghan and Iraq wars, said he knew of no Western equivalent to the preponderance of women in Israeli military intelligence.

“Women remain the minority in our armed forces, because there is not the conscription that sees so many women joining up in Israel,” he said.

“In my experience, while men tend to be physically stronger, women often tend to be more systematic, thorough and have a greater attention to detail at that age, which is obviously better for intelligence collection and analysis.”

On the Egyptian border, the Israelis also have mixed-sex paramilitary border police units and a mixed-sex infantry regiment, dubbed “Wildcat”, which conduct patrols and ambushes. One of Wildcat’s women was decorated for bravery after she killed a jihadi gunman who had shot dead a soldier in September.

Team Mor was on hand in August 2011, when rifle- and rocket-wielding jihadis slipped in from Sinai and killed eight Israelis. Israeli troops killed five Egyptian border police as they pursued the attackers, triggering a crisis in relations with Cairo.

The failure to prevent that incident clearly haunts Team Mor. Violence has simmered in Sinai since the citizen revolt that toppled the U.S.-backed Egyptian president, Hosni Mubarak, almost two years ago.

“Everything we watch on the other side we regard as a potential threat,” said a sergeant under Lieutenant Dafna.

This appears to include the Egyptian border police, whose lonely watchtowers appear every few kilometers along the fence. Cairo insists it is working hard to make Sinai secure.

The frontier can be friendly, too.

Israel’s female troops are allowed to wear their hair long and pulled back in pony tails, clearly identifying them as women and making for an unusual ensemble with combat gear and war paint.

“When we’re not concealed, and they (the Egyptian personnel) can see that we are girls, they’ll sometimes try to get our attention with messages – like one time when they lined up rocks in the sand to form a heart,” said the Team Mor sergeant.