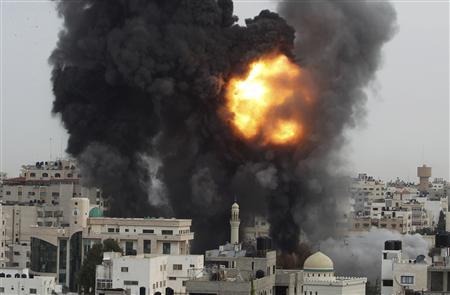 Israeli aircraft bombed Hamas government buildings in Gaza on Saturday, including the prime minister’s office, after Israel’s cabinet authorized the mobilization of up to 75,000 reservists, preparing for a possible ground invasion.

Israeli planes shattered the office building of Prime Minister Ismail Haniyeh – where he had met on Friday with the Egyptian prime minister – and struck the Interior Ministry.

Despite the violence, Tunisia’s foreign minister arrived in the coastal enclave on Saturday in a show of solidarity, denouncing the Israeli attacks as illegitimate and unacceptable.

Officials in Gaza said 41 Palestinians, among them 20 civilians including eight children and a pregnant woman, had been killed in Gaza since Israel began operations four days ago. Three Israeli civilians were killed by a rocket on Thursday.

Israel’s military said its air force had hit at least 180 targets since midnight, including a police headquarters, government buildings, rocket launching squads and a Hamas training facility in the impoverished territory.

A three-storey house belonging to Hamas official Abu Hassan Salah was also hit and completely destroyed early on Saturday. Rescuers said at least 30 people were pulled from the rubble.

“What Israel is doing is not legitimate and is not acceptable at all,” Tunisian Foreign Minister Rafik Abdesslem said as he visited Haniyeh’s wrecked headquarters. “It does not have total immunity and is not above international law.”

Israel launched a massive air campaign on Wednesday with the declared aim of deterring Hamas from launching cross-border rocket salvoes that have plagued southern Israel for years.

The Palestinians have fired hundreds of rockets out of Gaza, including one at Jerusalem and three at Tel Aviv – Israel’s commercial centre. Jerusalem had not been targeted in such a way since 1970, and Tel Aviv since 1991.

Although there were no reports of casualties or damage in either city, the long-range attacks came as a shock and advanced the prospect of an Israeli ground invasion into Gaza

“This will last as long as is needed; we have not limited ourselves in means or in time,” Foreign Minister Avigdor Lieberman told Israel’s Channel One television on Saturday.

Hamas says it is committed to continued confrontation with Israel and is eager not to seem any less resolute than smaller, more radical groups that have emerged in Gaza in recent years.

The Islamist Hamas has ruled Gaza since 2007. Israel pulled settlers out of Gaza in 2005 but has maintained a blockade of the territory.

Prime Minister Benjamin Netanyahu held a four-hour strategy session late on Friday with a clutch of senior ministers on widening the military campaign, while other cabinet members were polled by telephone on increasing mobilization.

Political sources said they decided to more than double the current reserve troop quota set for the Gaza offensive to 75,000. It did not necessarily mean all would be called up.

Three soldiers were lightly hurt by fire from the Gaza Strip on Saturday, the army said.

Egyptian Prime Minister Hisham Kandil paid a high-profile visit to Gaza on Friday, denouncing what he described as Israeli aggression and saying Cairo was prepared to mediate a ceasefire.

Egypt’s Islamist government, which took power after free elections following an uprising that ousted veteran autocrat Hosni Mubarak, is allied with Hamas but also party to a 1979 peace treaty with Israel.

“Egypt will spare no effort … to stop the aggression and to achieve a truce,” Kandil said.

A Palestinian official with knowledge of Cairo’s mediation efforts said on Saturday that Egypt was pursuing a truce.

“Egyptian mediators are continuing their mediation efforts and these will intensify in the coming hours,” he told Reuters.

In a further sign Netanyahu might be clearing the way for a ground operation, Israel’s armed forces decreed a highway leading to the territory and two roads bordering the enclave of 1.7 million Palestinians off-limits to civilian traffic.

Tanks and self-propelled guns were seen near the sandy border zone on Saturday, and around 16,000 reservists have already been called to active duty.

The Israeli military said some 367 rockets fired from Gaza had hit Israel since Wednesday and at least 222 more were intercepted by its Iron Dome anti-missile system.

Four Iron Domes were deployed initially and a fifth was rushed into action on Saturday, weeks ahead of schedule. The army said it was placed in the Tel Aviv area, showing Israel’s concern for the safety of its heavily populated coastline.

Netanyahu is favored to win a January election, but further rocket strikes against Tel Aviv, a free-wheeling city Israelis equate with New York, and Jerusalem, which Israel regards as its capital, could be political poison for the conservative leader.

In a call with Netanyahu, Obama discussed options for “de-escalating” the situation, the White House added.

Obama “reiterated U.S. support for Israel’s right to defend itself, and expressed regret over the loss of Israeli and Palestinian civilian lives,” a statement on the call said.

Israel Radio’s military affairs correspondent said the army’s Homefront Command had told municipal officials to make civil defense preparations for the possibility that fighting could drag on for seven weeks. An Israeli military spokeswoman declined to comment on the report.

The Gaza conflagration has stirred the pot of a Middle East already boiling from two years of Arab revolutions and a civil war in Syria that threatens to spread across borders.

“Israel should understand that many things have changed and that lots of water has run in the Arab river,” Tunisia’s Abdesslem told reporters in Gaza.

It is the stiffest challenge yet for Mursi, a veteran politician from the Muslim Brotherhood who was elected this year after protests ended Mubarak’s 30-year rule in 2011.

Egypt’s Muslim Brotherhood are spiritual mentors of Hamas, yet Mursi has also pledged to respect Cairo’s peace accord with Israel, which is seen in the West as the foundation of regional security. Egypt and Israel both receive billions of dollars in U.S. military aid to underwrite their treaty.

U.N. Secretary-General Ban Ki-moon is expected to visit Israel and Egypt next week to push for an end to the fighting in Gaza, U.N. diplomats said on Friday.

Hamas refuses to recognize Israel’s right to exist. By contrast, Palestinian President Mahmoud Abbas, who rules in the nearby West Bank, does recognize Israel, but peace talks between the two sides have been frozen since 2010.

Abbas’ supporters say they will push ahead with a plan to have Palestine declared an “observer state” rather than a mere “entity”, at the United Nations later this month.

SEKO LOGISTICS RECOGNISED AS A ‘QUALIFIED’ SUPPLIER TO THE AEROSPACE, DEFENCE, SECURITY AND SPACE SECTORS