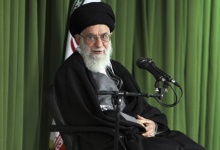 The U.N. nuclear watchdog ended its latest mission to Iran after talks on Tehran’s suspected secret atomic weapons research failed, a setback likely to increase the risk of confrontation with the West.

The United States criticized Iran on Wednesday over the failure of the International Atomic Energy Agency’s latest mission, saying it again showed Tehran’s refusal to abide by its international obligations over its nuclear program.

“With God’s help, and without paying attention to propaganda, Iran’s nuclear course should continue firmly and seriously,” he said on state television. “Pressures, sanctions and assassinations will bear no fruit. No obstacles can stop Iran’s nuclear work.”

A team from the Vienna-based IAEA had hoped to inspect a site at Parchin, southeast of Tehran, where the agency believes there is a facility to test explosives. But the IAEA said Iran “did not grant permission.”

The failure of the two-day visit by the IAEA could hamper any resumption of wider nuclear negotiations between Iran and six world powers – the United States, China, Russia, Britain, France and Germany – as the sense grows that Tehran feels it is being backed into a corner.

“This particular action by Iran suggests that they have not changed their behavior when it comes to abiding by their international obligations,” Carney told reporters, expressing U.S. disappointment that the IAEA mission had ended in failure.

Iran rejects accusations that its nuclear program is a covert bid to develop a nuclear weapons capability, saying it is seeking to produce only electricity.

As sanctions mount, ordinary Iranians are suffering from the effects of soaring prices and a collapsing currency. Several Iranian nuclear scientists have been killed over the past two years in bomb attacks that Tehran has blamed on its arch-adversary Israel.

In response, Iran has issued a series of statements asserting its right to self-defense and threatening to block the Strait of Hormuz, a vital oil tanker route.

The collapse of the nuclear talks came as Iran seems increasingly isolated, with some experts seeing the Islamic republic’s mounting defiance in response to sanctions against its oil industry and financial institutions as evidence that it is in no mood to compromise with the West.

Parliamentary elections on March 2 are expected to be won by supporters of Khamenei, an implacable enemy of the West.

The United States and Israel have not ruled out using force against Iran if they conclude that diplomacy and sanctions will not stop it from developing a nuclear bomb.

Lieberman said that “with all due respect I have for the United states and Russia, it’s none of their business. The security of Israel and its residents, Israel’s future, is the responsibility of Israel’s government.”

The failure of the IAEA’s mission may increase the chances of a strike by Israel on Iran, some analysts say.

But this would be “catastrophic for the region and for the whole system of international relations,” Russian Deputy Foreign Minister Gennady Gatilov said.

Referring to Iran’s role in the failure of the IAEA mission, French Deputy Foreign Ministry spokesman Romain Nadal said: “It is another missed opportunity. This refusal to cooperate adds to the recent statements made by Iranian officials welcoming the progress of their nuclear activities.”

In the view of some analysts, the Iranians may be trying to keep their opponents guessing as to their capabilities, a diplomatic strategy that has served them well in the past.

“But they may be overdoing the smoke and mirrors and as a result leaving themselves more vulnerable,” said professor Rosemary Hollis of London’s City University.

Iranian analyst Mohammad Marandi said providing the West with any more access than necessary to nuclear sites would be a sign of weakness.

“Under the current conditions it is not in Iran’s interest to cooperate more than is necessary because the West is waging a war against the Iranian nation,” he told Reuters.

“During both the first and second round of discussions, the agency team requested access to the military site at Parchin. Iran did not grant permission for this visit to take place,” the IAEA said in a statement.

“It is disappointing that Iran did not accept our request to visit Parchin. We engaged in a constructive spirit, but no agreement was reached,” Amano said.

A Western official added: “We think that if Iran has nothing to hide, why do they behave in that way?”

Iran’s refusal to curb sensitive atomic activities which can have both civilian and military purposes and its record of years of nuclear secrecy have drawn increasingly tough U.N. and separate U.S. and European measures.

An IAEA report in November suggested Iran had pursued military nuclear technology. It helped precipitate the latest sanctions by the European Union and United States.

One key finding was information that Iran had built a large containment chamber at Parchin to conduct high-explosives tests. The U.N. agency said there were “strong indicators of possible weapon development”.

The IAEA said intensive efforts had been made to reach agreement on a document “facilitating the clarification of unresolved issues” in connection with Iran’s nuclear program.

“Unfortunately, agreement was not reached on this document,” it said in an unusually blunt statement on Wednesday.

Headphone injuries 'on the rise'