INTERSOLAR EUROPE 2016: Most of the exhibition space already booked 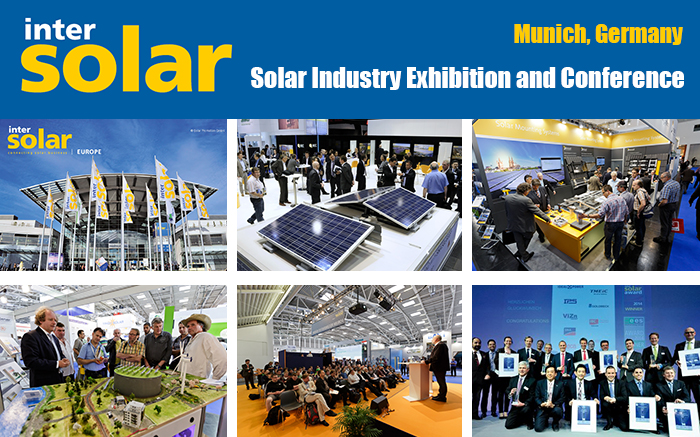 e-News® | The NEWS Company…Munich, October 15, 2015 : With still eight months to go until the start of Intersolar Europe 2016, the world’s leading exhibition for the solar industry and its partners is already showing a promising development. Around 70% of the exhibition space for Intersolar Europe and ees Europe has already been booked by international exhibitors, and demand is not faltering. This means that around 46,000 square meters have already been booked. The organizers attribute this positive development to the exhibition’s marked international orientation and consistent focus on new topics. One of the key topics of Intersolar Europe 2016 will be “smart energy”, with a dedicated area in hall B2.

In many regards, Intersolar Europe 2015 was a huge success for exhibitors, visitors and organizers alike: Almost 50% of approx. 38,000 visitors came to Munich from outside of Germany. The organizers counted 165 different countries of origin. The majority of exhibitors at Intersolar Europe came from Germany, China, Austria, France and Italy. At 96%, the share of industry professionals was as high as usual.

The high-caliber visitors are just one of the reasons why 87% of exhibitors rated Intersolar Europe 2015 extremely positively: They also valued the fact that Intersolar is a leading exhibition and covers the complete range of products and services. The great atmosphere at Intersolar Europe 2015 is already having a positive effect on booking behavior for 2016. Large areas have already been booked by companies such as Hanwha Q CELLS, JA Solar, Jinko Solar, SolarWorld and Wuxi Suntech Power from the cell and module manufacturing sectors, ABB, Fronius, Huawei, Robert Bosch and SMA from the inverter sector and BayWa r.e. renewable energy, E.ON Energie Deutschland and IBC Solar in the systems technology sector.

Both exhibitors and visitors respond positively to the topicality of areas covered at Intersolar Europe. In many markets, the focus now extends beyond achieving a reliable energy supply from renewable sources. Photovoltaics (PV) is experiencing a worldwide boom, which makes effectively using, controlling and storing solar energy more and more important. The buzz words are “smart home,” “smart building,” “smart cities” and “smart grid.” As intelligent control and storage are gaining importance, intelligent services and technologies are becoming vital for the future of energy supply.

It is becoming increasingly common for devices and energy flows to be digitally connected – not only in buildings and cities, but also in the power grids themselves. Consumption and generation are automatically analyzed and optimized, creating smart energy. This is even more important in light of the fact that both consumers and companies alike are becoming “prosumers” – energy market participants that not only consume but also generate power using photovoltaics, decentralized heat/power-generation units, wind energy and much more. As a result, we are seeing changes in the role of municipal utilities and municipalities, who are teaming up with large energy suppliers and developing new business models for generating, billing and transporting electricity. Companies offering products, services and solutions for intelligent energy supply will be assembled in hall B2 at Intersolar Europe 2016.

A whole range of events will be accompanying and complementing Intersolar Europe at Messe München next year. For the first time, the EU PVSEC, the world’s largest conference for photovoltaics, will take place at the same time as the Intersolar Europe Conference from June 21–22. And once again, Intersolar Europe will be accompanied by ees Europe, the continent’s largest exhibition for battery and energy storage systems, taking place from June 22–24, 2016. Together, both exhibitions offer a comprehensive range of products in the areas of solar energy generation and electrical energy storage. In 2016, the world’s leading exhibitions and conferences will join forces to cover the entire spectrum of energy storage and solar energy.

Further information on Intersolar Europe can be found at www.intersolar.de

About Intersolar
With events spanning four continents, Intersolar is the world’s leading exhibition series for the solar industry and its partners. It unites people and companies from around the world with the aim of increasing the share of solar power in our energy supply. Intersolar Europe is the world’s leading exhibition for the solar industry and its partners. It takes place annually at the Messe München exhibition center in Munich, Germany. The event’s exhibition and conference both focus on the areas of photovoltaics, PV production technologies, energy storage systems and renewable heating. Since being founded, Intersolar has become the most important industry platform for manufacturers, suppliers, distributors, service providers and partners in the global solar industry.

In 2015, more than 1,000 international exhibitors and around 38,000 trade visitors from 165 countries attended Intersolar Europe. Around 1,500 attendees discussed current industry topics and technological, market and political developments at the Intersolar Europe Conference and its side-events.

With over 20 years of experience, Intersolar has the unique ability to bring together members of the solar industry from across the world’s most influential markets. Intersolar exhibitions and conferences are held in Munich, San Francisco, Mumbai, Beijing, São Paulo and, starting in 2016, in Dubai. These global events are complemented by the Intersolar Summits, which take place in emerging and growing solar markets worldwide.

Tags: INTERSOLAR EUROPE 2016: Most of the exhibition space already booked