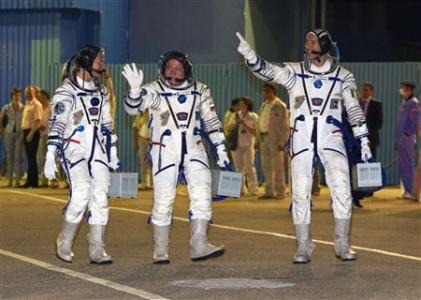 A Russian spaceship took a shortcut to the International Space Station on Tuesday, delivering a veteran cosmonaut, a rookie Italian astronaut and an American mother on her second flight to the outpost in less than six hours.

The capsule slipped into its berthing port at 10:10 p.m. EDT about 250 miles above the south Pacific Ocean.

Typically, the journey takes two days, but Russian engineers have developed new flight procedures that tweak the steering maneuvers and expedite the trip.

One other crew capsule and several cargo ships previously have taken the fast route to the station.

The express ride to the station began at 4:31 p.m. EDT when a Russian Soyuz rocket soared off its launch pad at the Baikonur Cosmodrome in Kazakhstan and deposited the crew’s capsule into orbit. The spaceship circled around the planet less than four times before catching up to the station, a $100 billion project of 15 nations.

Overseeing operations from aboard the capsule was veteran cosmonaut Fyodor Yurchikhin, 54, who will be living aboard the station for the third time. The former commander also flew on NASA’s now-retired space shuttle.

He was joined on the Soyuz by first-time astronaut Luca Parmitano, 36, a major in the Italian Air Force. Parmitano, who initially studied political science and international law at the University of Naples, is the first Italian to be assigned to a long-duration mission aboard the station, which is a laboratory for biomedical, materials science and other research.

“This is very momentous,” Parmitano said in a preflight NASA interview.

NASA gave the crew slot to the Italian Space Agency as part of a barter agreement for Italian-made cargo haulers used during the shuttle program.

Rounding out the crew is U.S. astronaut Karen Nyberg, a 43-year-old mechanical engineer who has one previous spaceflight on her resume, a two-week shuttle mission. Back on Earth, her astronaut husband, Doug Hurley, is looking after their three-year-old son, Jack.

Nyberg, an avid quilter, said she was bringing along sewing supplies, a sketch book and pencils.

“I’m really hoping to spend some of my free time drawing,” Nyberg said in a preflight interview. “I used to mostly draw portraits, and gave them to friends, but I haven’t done it in a long time.”

Awaiting their arrival were Russian station commander Pavel Vinogradov and flight engineers Alexander Misurkin, also a Russian, and Chris Cassidy, an American. The men are two months into a planned six-month mission.

The combined crews will oversee more than 100 research experiments and technology tests under way aboard the station. They also plan to conduct five spacewalks over the next three months, most of which are needed to prepare the station for a new Russian laboratory module due to arrive in December.