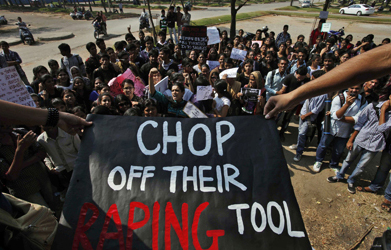 Indian students shout slogans during a protest rally in Hyderabad, India, Saturday, Dec. 22, 2012. The protest was against the recent gang rape and brutal beating of a 23-year-old student on a moving bus in New Delhi.

After fighting for life for nearly a fortnight, a medical student, who was gang-raped in New Delhi, died at a hospital in Singapore early Saturday. The 23-year-old girl died at the multi-organ speciality facility of Mount Elizabeth Hospital in Singapore at 2:15am Indian time, reports our New Delhi correspondent quoting a hospital statement.

The young woman, whose gang rape triggered huge revulsion and anger across the India, was admitted to the hospital Thursday morning in a critical condition. The hospital’s Chief Executive Officer Dr Kelvin Loh said they were very sad to report that the patient passed away peacefully at 4:45am local (Singapore) time. The girl’s family and officials from the High Commission of India in Singapore were by her side.

The girl’s body was taken to Singapore General Hospital where some formalities are expected to be completed before her parents fly back with her body to India later in the day. The police have arrested six people in connection with the gang rape and assault on the girl in New Delhi on December 16. Outrage over the attack, angry protesters had thronged central Delhi and in other major cities demanding better protection from police. The anti-rape protests in Delhi had turned violent last week when police used tear gas, water cannons and batons to fight back protesters. A police constable, who was injured during the protests, died on Tuesday.

As the death news reached India, Delhi Traffic Police issued an advisory, asking residents to avoid roads in and around the India Gate area on Saturday which had been site of surge of popular protests. Rajpath, Vijay Chowk, and many arterial roads around India Gate will remain closed, police said.

Prime Minister Manmohan Singh condoled the death of the girl and said,“I am deeply saddened to learn that the unfortunate victim of the brutal assault that took place on December 16 in New Delhi has succumbed to the grievous injuries she suffered following that attack”.

“I join the nation in conveying to her family and friends my deepest condolences at this terrible loss”, he said in a message.

Singh said, “I want to tell them and the nation that while she may have lost her battle for life, it is up to us all to ensure that her death will not have been in vain. We have already seen the emotions and energies this incident has generated.” These are perfectly understandable reactions from a young India and an India that genuinely desires change, the PM said. “It would be a true homage to her memory if we are able to channelise these emotions and energies into a constructive course of action,” the Indian PM added.

“The need of the hour is a dispassionate debate and inquiry into the critical changes that are required in societal attitudes. Government is examining, on priority basis, the penal provisions that exist for such crimes and measures to enhance the safety and security of women,” Singh said.

“I hope that the entire political class and civil society will set aside narrow sectional interests and agenda to help us all reach the end that we all desire – making India a demonstrably better and safer place for women to live in”, Indian PM said.

Amazon may launch a smartphone in Q4 2012