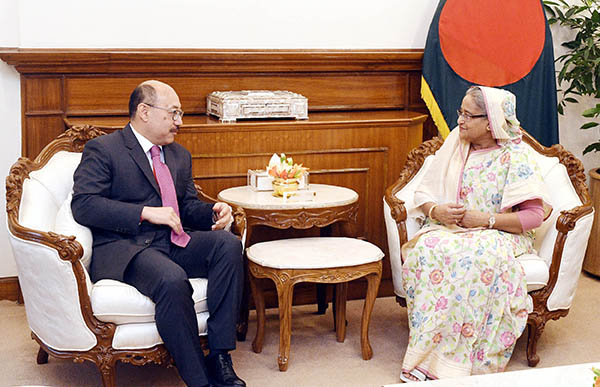 PM’s press secretary Ihsanul Karim said they mainly discussed the progress of the projects being implemented in Bangladesh with Indian cooperation.

Over the last nine years, Bangladesh and India have witnessed a remarkable progress in the cooperation on different conventional and nonconventional areas, particularly in the fields of power and energy, the press secretary quoted the Prime Minister as saying.

Sheikh Hasina said her government deeply appreciated Indian support and cooperation in the power and energy sectors and would like to explore more avenues of cooperation. She hoped that India would continue to cooperate with Bangladesh in ensuring energy security.

The envoy informed the Prime Minister of the present state of power projects and their future plan. Two sides are discussing for new power projects for subsequent export to Bangladesh, West Bengal and eastern part of India.

Sheikh Hasina said Bangladesh has allocated 1,000 acres of land in Chittagong for Indian investors where they, if wish, can set up LNG project.

Harsh Vardhan Shringla informed the Prime Minister of the three-day visit of Indian Home Minister Rajnath Singh to Bangladesh from July 13, 2018 and his visit to Police Academy in Sarda to strengthen cooperation between the
police academies of the two countries.

Sheikh Hasina recalled her visit to Shantiniketan in May last and talks with Indian Prime Minister Narendra Modi.

The Indian envoy said the Prime Minister’s visit to Shantiniketan left a very good impact on the relation and cooperation between the two countries. PM’s principal secretary Md Nojibur Rahman was present on the occasion.

Space Tech Conference 2015 takes off at the Long Beach Convention Center, California, May 19-21.