BREAKING NEWS
Home Common Had Mahfuz Anam any self-dignity, he should have resigned: PM

Had Mahfuz Anam any self-dignity, he should have resigned: PM 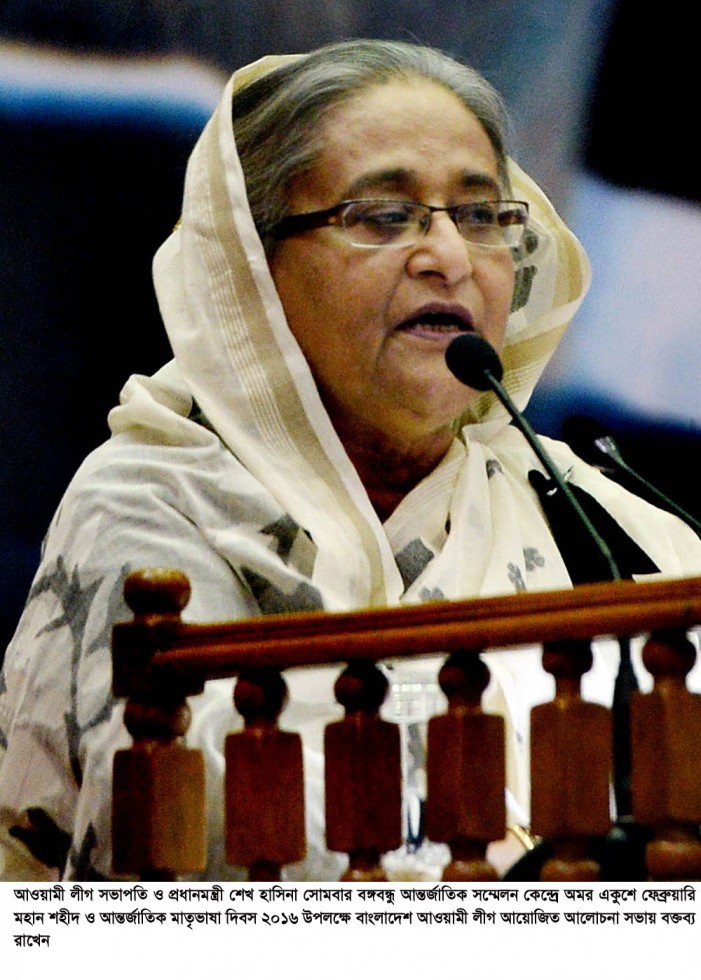 e-News® | The NEWS Company…DHAKA, Feb 22, 2016 : Blasting The Daily Star for publishing the DGFI- supplied false news against her (Sheikh Hasina) during the last caretaker regime, Prime Minister Sheikh Hasina today said the editor himself could not show his “courage” in resigning from his post by admitting his faults.

“Though Mahfuz Anam admitted his mistakes, he could not display his courage in resigning from the post of the Editor of Daily Star by admitting his faults…he must have tendered his resignation, had he any self-dignity,” she said.

For such a mistake, the Premier said, everybody including the common people as well as the Awami League leaders and workers, business people and the students’ community had paid unbearable prices. I and my family had also paid the dividend very dearly for the mistake as the daily wrote against me,” she said.

The Prime Minster said this while addressing a discussion on the occasion of the Amar Ekushey and the International Mother Language Day. Bangladesh Awami League arranged the discussion at Bangabandhu International Conference Centre. Deputy Leader of the House and Awami League Presidium Member Syeda Sajeda Chowdhury chaired the function.

At the outset of the discussion, a one-minute silence was observed as a mark of profound respect to the memories of Father of the Nation Bangabandhu Sheikh Mujibur Rahman, four national leaders, martyrs of the War of Liberation and the Language Movement.

In this respect, Prime Minster Sheikh Hasina referred to the resignation of the BBC director general and its some other journalists for disseminating false news against a minister or MP and said they had quit their posts showing their moral courage.

“When it was proved that the news was fake, then the BBC DG and others involved in disseminating that news had not only begged pardon, but resigned from their posts,” she said adding, they did it as they had moral courage.

In this connection, she sounded a note of warning that those, who had
orchestrated conspiracies to snatch the democratic rights and prolong power by axing upon democracy leading to inflicting torture upon the people, would be tried the way the war criminals are being tried.

“Those who were involved in this conspiratorial plot would be tried like the war criminals for destroying the constitution,” Sheikh Hasina said adding that The Daily Star became too disparate to brand her as “corrupt” during the last caretaker regime by publishing news everyday against her.

“So, I would like to tell Mahfuz Anam that you have made many ill attempts to brand me as corrupt. You are merely a Mahfuz Anam, but your mentor World Bank even could not label me as corrupt over the Padma Bridge issue,” she said.

The Premier said when a so-called corruption charge was labeled upon the Padma Bridge project, then there hovered many tall talks around it. “It appeared as if that we (Daily Star and similar newspapers) have caught you (Sheikh Hasina) this time,” she said.

Sheikh Hasina said a certain quarter is now expressing their “frustration and grief” for filing cases against The Daily Star editor.

“My house was searched twice and I was arrested without any warrant. My sick husband fell down by a push…we did not disclose it, but I want to know who had provoked it?,” she said in an emotion-charged voice.

Sheikh Hasina said she was dragged to jail, where she had to live in a damp room and sleep on a fragile, torn bed. No food was served to me until the arrest of Khaleda Zia….what a crude reality that was!” she said.

Posing a question to those, now making statements against filing of the cases against Mahfuz Anam, Sheikh Hasina said she was kept into solitary confinement for 11 months but there is no such instance in the case of a convicted person.

“Even my relatives were not allowed to meet me on the Eid day. I became sick as I suffered from allergy and eye infection, but no physician was permitted to visit me,” she said.

She said her husband and “fupu” (aunt) were at last allowed to meet her on the Eid day, but she( fupu) was asked not to disclose her sickness to the media. “My fupu did not disclose it on that day, but she revealed it later by calling reporters to her house,” she said.

The Prime Minister said she was later shifted to the hospital from the jail, but was again taken to the jail when the doctors said blood test was needed for her. “I was transferred to the hospital again when I fell sick due to low pressure,” she said.

At that situation, Sheikh Hasina said, I was not allowed to change my dress and I was taken to the court to appear for cases. There were 16 cases against me…one dozen filed by the BNP and the rest by the caretaker government,” she said.

The Premier said her question is to those who are making statements
protesting filing of the cases against The Daily Star editor as to what would be the reaction if they were kept into solitary confinement for 11 months, charged by cases and blamed.

“Would you make statements and offer sympathy if torture, repression and mental pressure are inflicted on your families like my son, daughter and sister during the time,” she said.

The greed for power of those who pushed us into risk took the country towards destruction, she said adding, you are so worried as you are expressing concern for filing cases against Mahfuz Anam. But what would happen, if you are taken into solitary confinement for 11 months? She asked.

The Premier said the then caretaker government tried to form a King’s Party, but they failed. Later a “world-renowned Bangladeshi person” tried to float a political party and prepared a list of 70 persons while the editor backed it, but nobody extended hands to that end, she said.

Speaking about the January 5 elections, Sheikh Hasina said the people would judge the role of the newspaper, which tried to foil that polls. “But when we held the elections, frustration gripped them as their dreams went unfulfilled while getting ready to get flag,” she said.

When the War of Liberation began, she said, we had sudden disruption in our study but the editor of that daily moved to West Pakistan for his education.
Later, he went to Kolkata and he was given the responsibility for writing English as he knew English…this is his joining the War of Liberation,” she also said.

“What could we expect from a person, who moved to Pakistan during the war for higher education? What these people, who helped Brigadier Amin and Brigadier Bari as well as the DGFI, can deliver for the country and the people?” she said.

The Prime Minister said those, who published the DGFI-supplied fake news, had so far written “fake, false and adulterated reports” by pretending to be honest,” she said adding, “their intention is to destroy the country.”

In this connection, she mentioned that some leaders of Awami League have opened their mouth on this issue, but there is still hesitation among some leaders to speak the truth.

The Prime Minister said two papers of the country were always engaged in spreading malice against her over the last 20 years of her political career. ” Except for the initial few years, these newspapers since their inception always spread malice against me and wrote against me…it seems that Awami League is their enemy,” she said.

“Their faces have now been unmasked as truth can never be suppressed,” she said adding that the people of Bangladesh were in a “dark era” during the five-year rule of BNP and the two-year regime of the caretaker government.”

Sheikh Hasina said the country witnessed the emergency rule due to misrule and corruption of the BNP-Jamaat government. “A different face emerged when the caretaker regime assumed power. They tried to consolidate their power and the two newspapers backed them,” she said.

The Prime Minister said The Daily Star editor admitted that he had published the DGFI supplied unverified news, but the newspaper’s masthead always reads “without fear or favour”.

But what kind of journalism was without fear at that time when he published news without verification. “My question is that what type of friendship he had with the DGFI or Brig Bari or Brig Amin? Was it a fact that he had been sold out to them?, she said.

Sheikh Hasina also wanted to know whether he was involved in the plots of “minus two formula.” If you have courage, she said, admit the truth to the nation.” “If you publish such false news, there won’t be journalism without fear, but I have nothing to say if you are sold out,” she said.

The Premier said the greatest Ekushey is the symbol of grief, strength and glory in the life of every Bangali. “On this Day in 1952, many valiant sons of the soil, including Rafiq, Shafique, Salam, Barkat and Jabbar sacrificed their lives for protecting the dignity of the mother tongue,” she said.

Sheikh Hasina paid her deep homage to the memories of the martyrs. She also paid her deep respect to the greatest Bangali of all time, Father of the Nation Bangabandhu Sheikh Mujibur Rahman, who had steered the language movement from inside the jail, and all other language veterans.

The resonance of the pride of Amar Ekushey is now resounded in the hearts of the people of 193 countries surpassing the boundary of Bangladesh, she said.

“The day has reached to a new height when the UNESCO gave recognition to the 21 February as the International Mother Language Day on 17 November 1999 at the initiative of the then Awami League government and with the help of some expatriate Bangladeshis,” she said.

She said the greatest Ekushey is the symbol of our democratic values, Bangali nationalism, spirit of liberation struggle and secularism.

The Prime Minister said her government has relentlessly been working to build a modern and prosperous Bangladesh free from poverty, hunger, terrorism, communalism and illiteracy being imbued with the spirit of the great Ekushey.

“During the last 7 years, our government achieved desired progress in all sectors. Bangladesh is now a role model for development in the world,” added the Prime Minister.

Tags: Had Mahfuz Anam any self-dignityhe should have resigned: PM

Buzz Aldrin trip to the moon in 1969 : The US government reimbursed $33