Google to start TV service in U.S. this autumn

BERLIN (Reuters) – Google Inc will launch its service to bring the Web to TV screens in the United States this autumn and worldwide next year, its chief executive said, as it extends its reach from the desktop to the living room.

CEO Eric Schmidt said the service, which will allow full Internet browsing via the television, would be free, and Google would work with a variety of programme makers and electronics manufacturers to bring it to consumers. 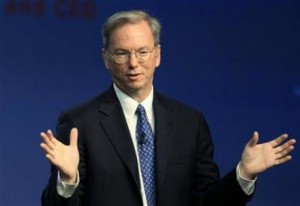 “We will work with content providers, but it is very unlikely that we will get into actual content production,” Schmidt told journalists after a keynote speech to the IFA consumer electronics trade fair in Berlin.

Sony said last week it had agreed to have Google TV on its television sets, and Samsung has said it was looking into using the service.

The announcement comes less than a week after rival Apple

unveiled its latest Apple TV product and will intensify a battle for consumers’ attention and potentially for the $180 billion global TV advertising market.

Schmidt also said Google would announce partnerships later this year with makers of tablet computers that would use Google’s Chrome operating system, due to be launched soon, rather than its Android phone software, which has been used for mobile devices until now.

The Mountain View, California-based company plans to make Chrome, which competes with Microsoft’s Internet Explorer and Mozilla’s Firefox, the center of an operating system that would offer an alternative to Microsoft Windows.

The world’s No.1 search engine is hunting for new revenue opportunities as growth in its core Internet business slows and as new technologies such as smartphones and social networking services transform the way consumers access the Web.

Schmidt declined to comment on Google’s plans for a social network of its own, and while he said there were plans to expand in music, he would not elaborate.

Reuters reported last week that Google was in talks with music labels for a music download store and a digital song locker.

Asked about criticism over Google’s Street View in Germany, Schmidt said he had anticipated it and that he had talks with some members of the German government during his stay in Berlin.

“What’s unusual is that we’ve given you (the Germans) the possibility to opt out before (the launch); we have never done that anywhere else.”

Google’s Street View cars are well known for crisscrossing the globe and taking panoramic pictures of the city streets, which the company displays in its online Maps product.

Critics say the tool invites abuse. They argue thieves can search for targets, security firms could use the data for sales pitches, job seekers might find their homes scrutinized by employers, and banks could inspect the homes of loan applicants.

Google ran into trouble in Germany in May after authorities found out that Street View vehicles were collecting private data sent over unencrypted WiFi networks.

“I was very angry about that,” Schmidt said, adding that once it was discovered, Google put an end to it.

By Nicola Leske / (Editing by Hans Peters and Will Waterman)