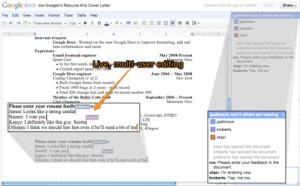 The updates come to three apps within Google Docs: Doc, Spreadsheets, and a new Drawing editor. The Drawing editor will roll out over the course of the day, and the new document and spreadsheet editors will be available only via opt-in preview sometime soon. One at a time, here’s what you can expect:
The Google Docs Document Editor Gets Real-Time, Looks and Feels More Like a Desktop Word Processor

If you’re a regular user of word processing in Docs, you’ll notice Google Wave-like cursor chasing (like you see in the screenshot at top), which provides real-time, character-by-character updates of what everyone’s doing inside Docs so you don’t have to worry about stepping on each others toes, ending up with out-of-sync versions, and so on. Basically collaborating in Docs just got a whole lot better. You can also now collaborate simultaneously with up to 50 users (seems more than most would ever need, and I’m not really sure what the limit was before this).

Frequent users will also notice the addition of common word processor features to the web editor, including:

Rulers and floating images aside, the as-you-type spell check and commenting system tread more closely to some of what makes Google Wave so great. Users can now comment on sections of a document without disrupting the flow of a document or editing it directly.

I wouldn’t say that these Wave-like features come close to doing what Wave can do, but for many users, the live typing and inline document commenting are all they’d want from Wave, and in those cases, these Docs updates are perfect.

Spreadsheets Speed Up, Get More Desktop-Like 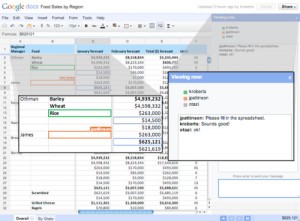 If you’re a Google Spreadsheets user, expect a faster all around experience along with several nice new features—again, features that make Spreadsheets more desktop-like:

The Drawing Editor Lets You Create, Collaborate on, and Export Complex Images 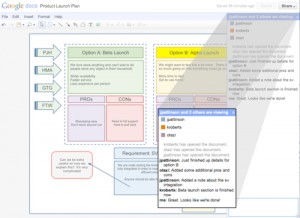 Drawing editor to create and publish images using a basic set of drawing tools. The “drawing” we’re talking about here looks to be more business than creative (think less image editing, more Microsoft Visio). Again, the Drawing editor is collaborative (up to 50 users can edit simultaneously), and images created with the Drawing editor can be downloaded in most standard formats (PNG, JPG, SVG, and PDF). The Drawing editor only works with Firefox, Safari, and Chrome (you can also use it in Internet Explorer if you’ve installed Chrome Frame).

The new editors do not support Gears for offline storage and access, and Google is disabling this feature in Docs on May 3. That doesn’t mean that offline access is off the table—Google is still planning to bring offline access to Docs via HTML5 technology at some point in the future—but it does mean that there’s going to be a gap in support for offline access.

A Big Step Forward for Collaboration 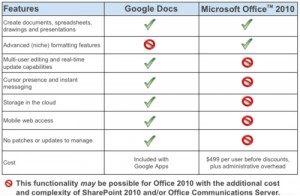 These updates look like a big and important step forward for using Google Docs as a collaboration tool. It’s pretty clear that Google’s aiming squarely at Microsoft Office with these features, and depending on the business, the strength of Google Docs’ collaboration tools may be exactly the ticket. At the same time, Docs still doesn’t have the raw power and deep feature set of Microsoft’s suite of tools. If you need all that power, desktop tools is still the way to go. If not, Google Docs is getting better and better at handling your basic document and spreadsheet collaboration needs.

Women voters in India want to stand up and be counted

Do We Trust Robots Too Much?