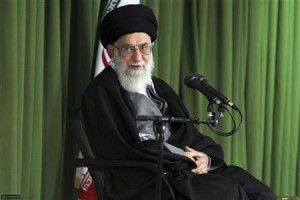 When U.S. officials join talks this weekend about Iran’s nuclear program, they will be armed with profiles developed by intelligence agencies offering insight into what makes foreign leaders tick.

One key player will not be at the table in Istanbul, where negotiations are scheduled between Iran and six world powers, but his stamp of approval will be required for any deal to fly.

“Iran’s supreme leader, Ali Khamenei, has the final word on Iran’s foreign, domestic, and security policies. He is the ultimate decision-maker,” a U.S. official said.

Since U.S. severed diplomatic ties more than 30 years ago, first-hand observation of Iranian leaders is a rarity for Americans. U.S. spy agencies must rely on the inexact art of long-distance analysis to profile leaders of an opaque system.

Former U.S. officials and Iran experts say Khamenei has a deep-rooted suspicion of the West and a streak of insecurity – he rose to power due to his loyalty to the late Ayatollah Ruhollah Khomeini rather than lofty religious credentials.

A sense of inferiority has dogged him over the years and it would be especially important for Khamenei to be seen as not folding under Western pressure to reach an agreement, they said.

“There were many much more educated than he and he had to prove himself in a continuing fashion to those who considered his credentials inferior,” said Jerrold Post, director of the political psychology program at George Washington University.

“He has always been a balancer. Taking competing interests and finding a way of weighing them both, which is positive in some ways but also can at times give a sense of vacillation,” said Post, a doctor who founded the CIA’s Center for the Analysis of Personality and Political Behavior.

Other leadership analysts in the CIA’s Directorate of Intelligence, with degrees in political science, international relations, anthropology and political psychology, also profile foreign leaders and decision-makers to help U.S. policymakers deal with their counterparts.

The practice of compiling psychological profiles of foreign leaders from afar has engendered occasional skepticism.

One substantive criticism, a former intelligence official said, is that the profiles sometimes are so general in describing a leader’s personality that they are of little help to decision-makers. There is also a “so what” element to knowing a leader’s psychology because U.S. officials must react to their actions rather than personality, another former official said.

Intelligence analysts read what is being written in the leader’s home country, analyze speeches, study reactions to other crises and incorporate information from defectors to create profiles to help U.S. officials frame and discuss issues.

They look at forces that shaped the leader: family background, successes, failures, crisis decision-making, and the leader’s relationship with the inner circle.

Currently, the U.S. intelligence assessment is that Iran has not made the decision to build a nuclear weapon, and experts say it is Khamenei, 72, who would make that call.

But even if the United States had great access to Iran, the intentions of one man are not easy to discern.

“It’s important to keep in mind that these analysts are trying to assess complex human beings, including all the outside factors that might influence them,” the U.S. official said.

One question about Khamenei’s intentions is his stated view that nuclear weapons are a sin.

Some experts shrug it off, saying the Iranian leader could issue a new religious edict if it suits a changing circumstance.

But Paul Pillar, a former senior CIA analyst, sees the proclamation as a potentially hopeful sign for nuclear talks.

“It gives him an out,” said Pillar, a Georgetown University professor. “He is on record as having made a statement that would not make it shameful or a sign of weakness to come to an understanding with the West … that clearly rules out a nuclear weapon.”

WHAT MAKES THEM TICK

Leadership analysts look for what makes the person tick to determine what would be a hot button, what would elicit anger, rapport, understanding, and subtexts such as political ambition.

But he is now operating in a more divisive political climate which might have taken some toll on his power base, experts say.

“One of the great questions we have is even if he (Khamenei) decided today let’s give up the nuclear program, let’s cut the deal, could he make it stick?” said Jon Wolfsthal of the center for nonproliferation studies at the Monterey Institute for International Studies.

“Does he really have all the power that we think he does? That is not clear.” said Wolfsthal, a former adviser to Vice President Joe Biden on nuclear security.

While Khamenei says Iran does not seek nuclear weapons, he has insisted that others respect Iran’s civilian nuclear rights.

Standing up for injustice and for Iran’s rights is central to how he looks at the nuclear issue and should be considered in how the West frames its approach so that it allows him to save face, a former U.S. government Middle East expert said.

Policymakers also bring their own, sometimes flawed, knowledge and understanding about foreign leaders from associating with them. That can lead to friction when they disagree with the intelligence profile.

For example, the VIP medical team at the CIA did an assessment of Jean-Bertrand Aristide during former President Bill Clinton’s administration that made the Haitian president sound like a “nut” and became fodder for his opponents in the U.S. Congress, a former intelligence official said. That irritated the Clinton administration.

It was a misreading of the profile because the CIA psychiatrist did not think Aristide was crazy, but meant he was unusual as anyone who reached such a position would be.

Khamenei has been in office for a long time “so we have accumulated a lot of knowledge of his world view,” said Ellen Laipson, president of the Stimson Center think tank.

“On the one hand we see him as a figure who doesn’t really trust the international system, doesn’t trust the United States, but he is also not extremely reckless,” said Laipson, a former vice chair of the National Intelligence Council.

Retired U.S. diplomat John Limbert met Khamenei – but under trying circumstances in 1980 when he was held hostage in Iran.

Khamenei asked how things were and Limbert’s reply in Farsi was a not-so-subtle dig about Iranians being famous for their hospitality.

“He really wasn’t trying to convert me to anything. He didn’t have the kind of complexes and resentments that you found on some of the revolutionaries,” recalled Limbert, now a professor on the Middle East at the U.S. Naval Academy.

The Iranian leader’s overarching concern now is one shared by the powerful everywhere. “For Khamenei, like his colleagues, the priority is political survival,” Limbert said.