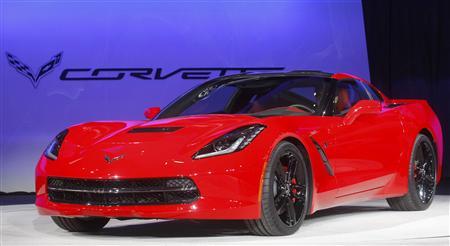 The message from automotive CEOs at the opening of this year’s Detroit auto show is deceptively simple: Sportscars are hot, electrics are not.

Despite that hiccup, executives generally seemed upbeat about the mood of the U.S. auto industry as it enters a fourth year of recovery from the 2009 meltdown and bankruptcies of GM and Chrysler.

“Without trying to read tarot cards and tea leaves, 2013 is structurally going in the right direction. It will be the best year on record since I’ve been here,” said Fiat’s Marchionne, whose company was handed control of Chrysler four years ago.

If U.S. consumers’ views of green cars remains skeptical, their unabated appetite for performance and luxury models is widely evident on the show floor at Detroit’s Cobo Center, even to industry officials from overseas.

“The U.S. auto market has revitalized itself with amazing speed and dynamism,” said Matthias Wissmann, head of Germany’s carmaker association (VDA). “The fascination of the car is again alive and well in the U.S.”

Part of that fascination is being driven by foreign brands such as Maserati, like Chrysler part of the Fiat group. But not every out-of-town executive is sanguine about prospects in the U.S. market.

The Detroit show has lost its luster for Lamborghini, the Italian supercar maker owned by Volkswagen AG, which quit the most significant U.S. auto show after 2009.

“For us, a return to the show isn’t on the agenda at the moment,” CEO Stephan Winkelmann said in an interview, noting the scarcity of Lamborghini customers in and around the Detroit area. “You have to spend your marketing budget wisely. The Detroit show isn’t marked red in our calendar.”

Still, the United States remains Lamborghini’s biggest market where the brand boosted sales 53 percent last year and will premiere its new Aventador roadster at a special event in Miami in early February, the CEO said.

Not quite in the same league as Lamborghini, but drawing considerably more interest from the hometown crowd, is the new 2014 Corvette, which goes on sale later this year.

On the show’s first media preview day, GM elicited much attention, not only for the new Corvette, but for its redesigned pickup trucks, the Chevrolet Silverado and GMC Sierra. And a jury of U.S. and Canadian journalists on Monday recognized GM’s Cadillac ATS as the 2013 North American Car of the Year.

Another new Cadillac, the 2014 ELR plug-in hybrid, will be unveiled at the show Tuesday. But its potential appeal to consumers may be driven as much by the car’s luxury trappings and sporty styling as by its gasoline-electric drivetrain, which the ELR shares with the Chevrolet Volt.

At the opposite end of the pricing spectrum, the 2013 Nissan Leaf is being repositioned as one of the most affordable electric cars in the United States, with a new starting price below $30,000. Now that the car and its battery pack are being assembled locally to benefit from the weaker U.S. dollar, “we are making the consumer benefit as soon as possible from the cost reduction,” Ghosn said.

Bucking the general apathy toward green cars is Toyota Motor Corp, which is featuring a variety of new hybrid models on its show stand and said sales of its gasoline-electric hybrid vehicles climbed 7 percent to 350,000, more than two-thirds of them wearing the Prius badge.

Is BlackBerry 10 Better Than Galaxy S III and iPhone 5?