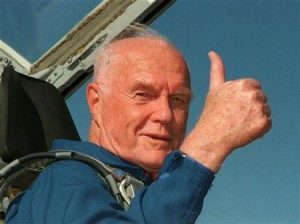 Fifty years after John Glenn became the first American to orbit Earth, NASA no longer has the ability to fly astronauts in space, a decision Glenn lays squarely on the shoulders of the Bush administration.

Glenn’s groundbreaking flight on February 20, 1962, put the United States into a heated space race with the Soviet Union, which had launched cosmonaut Yuri Gagarin into orbit 10 months earlier.

The retirement of the shuttles last year left the United States dependent on its former Cold War foe to get astronauts to and from the jointly owned International Space Station, which flies about 240 miles above the planet.

“I regret that that is the way things have developed,” Glenn told a crowd of current and former NASA employees and guests at the Kennedy Space Center Visitor Complex on Saturday night, part of a series of celebrations marking the 50th anniversary of his flight.

“We spent over $100 billion dollars putting the space station up there. It’s too bad in the previous administration the decision was made to end the shuttle, so now we have to go somewhere else to even get up to our station,” said Glenn, who served as a Democratic senator from Ohio between 1975 to 1999.

The United States grounded its aging shuttles last year due to high operating costs and to free up funds for a new generation of spacecraft that can fly farther from Earth. More money would have been needed years earlier in order for the new ships to be ready by the time the old ones were retired.

Glenn parlayed his political connections into a long-awaited return to space in 1998 when, at age 77, he flew aboard the space shuttle Discovery as a research subject for experiments on aging sponsored by the National Institutes of Health.

Now 90, Glenn, a retired Marine Corps pilot, said research is the most important benefit of the U.S. space program and lauded the decision to extend the International Space Station’s life to at least 2020 from 2015.

“People say, ‘Well, what good is research?’ I think every bit of progress made by human beings has been made because somebody was curious about the unknown,” Glenn said.

“If there’s one thing we have learned through the history of our country, it’s that money spent on basic research has a way of paying back in the future beyond anything we ever see at the outset,” he said.

Though research was not the reason Glenn and his Mercury Seven colleagues were launched into orbit, scientists had many questions about how the human body would manage in the weightless environment of space.

“The things we were looking at back on those first flights seem so primitive now, they’re almost laughable,” Glenn said. “The doctors were literally concerned that your eyes might change shape and your vision might change enough that you couldn’t even see the instrument panel. We actually put a little miniaturized eye chart on the top of instrument panel.

Scott Carpenter, who followed Glenn into orbit three months later, said he swallowed radioactive food so doctors could see if his body could metabolize food in weightlessness.

“It was senseless, because you can eat food standing on your head and you process it very nicely. Why couldn’t we do it the same way in zero gravity? Well, we had to prove it. I was given some radioactive food in a toothpaste tube and I was told to eat that on the first orbit. It was radioactive so they could trace its movement through my body,” Carpenter said.

Two more Mercury missions followed Glenn and Carpenter’s three-orbit flights, paving the way for the Gemini program and finally the real goal of the nascent human space program – sending a crew to the Moon.

“Although we were behind the Soviet Union, we were able to overtake them and do exactly what (President John F.) Kennedy told us to do,” Glenn said. “In so doing we would beat the Russians to the Moon.”

Now it is Russia that flies Americans into space aboard its Soyuz spacecraft, a service that costs NASA more than $300 million a year. The U.S. space agency also is spending about $3 billion a year to develop a capsule and rocket that can carry astronauts to the Moon, asteroids, Mars and other destinations beyond the space station. The first manned test flight is expected in 2021.

Meanwhile, in hopes of breaking Russia’s monopoly on station crew transportation, NASA has invested $365.5 million since 2010 in six companies working to develop commercial space taxis. The agency wants $830 million for the year beginning October 1 to keep work going at two or more firms.

“I hope that some of these efforts to re-create our own transportation system come through and don’t have a lot of problems because until then we are dependent on the Russians to get us into space,” Glenn told Reuters.

“If anything happens to the Soyuz, if it should have to be grounded for any particular reason, we have no way of getting into space. It would end our manned program until we can invent new ways to get up there,” Glenn said.

“There are lots of reasons behind our current predicament,” added Carpenter. “But what it boils down to is the simple fact that when John and I went to work for this country, the United States was recognized around the world as a can-do nation. We have become viewed around the planet as a can’t-do nation and I deplore that.”