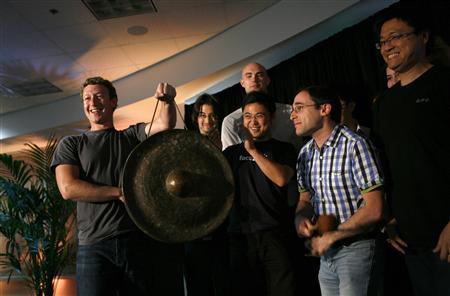 Traveling to space or embarking on an expedition to excavate lost Mayan ruins are normally the stuff of adventure novels. But for employees of Facebook, these and other lavish dreams are moving closer to reality as the world’s No. 1 online social network prepares for a blockbuster initial public offering that could create at least a thousand millionaires.

The most anticipated stock market debut of 2012 is expected to value Facebook at as much as $100 billion, which would top just about any of Silicon Valley’s most celebrated coming-out parties, from Netscape to Google Inc.

While weak financial markets could postpone or downsize any IPO, even the most conservative market-watchers say Facebook seems destined to set a new benchmark in a region famous for minting fortunes, with even the rank-and-file employees reaping millions of dollars.

Facebook employees past and present are already hatching plans on how to spend their anticipated new wealth, even as securities regulations typically prevent employee stock options from being cashed in until after a six-month lock-up period.

“There’s been discussions of sort of bucket list ideas that people are putting together of things they always wanted to do and now we’ll be able to do it,” said one former employee who had joined Facebook in 2005, shortly after it was founded.

He is looking into booking a trip to space that would cost $200,000 or more with Virgin Galactic or one of the other companies working on future space tourism. That’s chump change when he expects his shares in Facebook to be worth some $50 million.

“If that IPO bell happens, then I will definitely put money down,” said the person, who declined to be identified because he did not want to draw attention to his financial status, given the antiglitz ethos of many people in Silicon Valley. “It’s been a childhood dream,” he said of space travel.

Others are thinking less science fiction and more “Indiana Jones.” A group of current and former Facebook workers has begun laying the groundwork for an expedition to Mexico that sounds more suited to characters from the Steven Spielberg film “Raiders of the Lost Ark” than to the computer geeks famously portrayed in the movie about Facebook, “The Social Network.”

Initially, the group wanted to organize its own jungle expedition to excavate a relatively untouched site of Mayan ruins, according to people familiar with the matter who also did not want to court notoriety by being identified in this story. After some debate earlier this year, they are now looking at partnering with an existing archeological program.

Founded in a Harvard dorm room in 2004 by Mark Zuckerberg and his friends, Facebook has grown into the world’s biggest social network with over 800 million members and revenue of $1.6 billion in the first half of 2011.

Information about its ownership structure or employee compensation packages is hard to come by, since the still-private company discloses very little. Facebook declined to comment for this story.

It is clear that Facebook’s earliest employees, who were given ownership stakes, and early venture capital investors — such as Accel Partners, Greylock Partners and Paypal co-founder Peter Thiel — will see the biggest paydays. Zuckerberg, 27, is estimated to own a little over a fifth of the company, according to “The Facebook Effect” author David Kirkpatrick.

But the wealth will trickle down to engineers, salespeople and other staffers who later joined the company, since most employees receive salary plus some kind of equity-based compensation, such as restricted stock units or stock options.

Facebook’s headcount has swelled from 700 employees in late 2008 to more than 3,000 today. Given its generous use of equity-based compensation in past years, people familiar with Facebook say that even by conservative estimates there are likely to be well over a thousand people looking at million-dollar-plus paydays after the company goes public.

“There will be thousands of millionaires,” said a former in-house recruiter at Facebook, who did not want to be identified because of confidentiality agreements.

Lou Kerner, the head of private trading at Liquidnet, estimates that Facebook now has roughly 2.5 billion shares outstanding, which would translate to a per-share price of $40 at a $100 billion valuation.

Engineers are the most richly rewarded among the rank and file. The former Facebook recruiter said as recently as 2009, the company gave an engineer with 15 years experience options to buy about 65,000 shares at around $6 per share.

According to another former Facebook employee, it was not unusual for the company to offer some executive-level hires up to 100,000 restricted shares as recently as three years ago.

The company has since cut back on equity compensation for new hires. Managers hired one year ago received 2,000 to 30,000 restricted shares depending on the job function, according to another recruiter who had also worked for Facebook.

The company has also been stingier in handing out equity to noncore employees — so there may not be as many of the dazzling rags-to-riches stories that were commonplace at the time of the Google IPO, when in-house chefs and at least one masseuse struck gold with options.

Facebook has its share of chefs — including head chef Josef Desimone who was lured away from Google — and other support staff, but it’s not clear how many of them were awarded share options.

These days, “Google and Facebook are notorious for hiring contract employees they don’t have to give equity to,” said the second former Facebook recruiter.

Facebook’s IPO has been long anticipated, but veterans of other startups that have gone public say the period after could be fraught with new challenges.

Some employees could grow jealous over colleagues with more stock, while others might look down on peers who are too quick to sell, questioning their loyalty to the company.

And there is always the risk that talented staff would leave with their newfound wealth to make their own mark in the technology world by becoming entrepreneurs or investing in other promising startups.

Some Facebook employees have already left the company to do that, selling their shares ahead of the IPO on private exchanges such as those run by SecondMarket or SharesPost.

One such person is engineer Karel Baloun, who joined the social network in 2005 and left just over a year later to start his own online network for commodities-futures traders, funded by a tidy package of stock options. It failed and Baloun laments that he could have made a lot more money if he had stayed at Facebook.

But he is philosophical, saying that the equity windfall gave him the cushion to do new things.

“It’s really wonderful being able to choose your work based on the meaning of it, not the size of your salary,” said Baloun, now chief technology officer at mobile-commerce company Leap Commerce. “I have two kids, and I couldn’t do it if I didn’t have some savings from this IPO.”

Baloun said he has sold about half his Facebook shares and is holding on to the rest until after the IPO. “I will buy a house,” he said.

For many of Facebook’s staffers, the IPO will provide the means to pay off school loans and buy a house or new car. Home prices in the San Francisco Bay Area have typically been lofty, but many homeowners and real-estate agents are eagerly anticipating a surge of new buyers flush with money from the IPOs of Facebook and other Web companies.

Wealth managers and investment advisers are also looking to win new clients from the Facebook crowd.

“A lot of them are going to be multimillionaires at 30 and live to be 100. That means creating a 70-year plan, which is unheard of,” said John Valentine of Valentine Capital Asset Management in San Ramon, California, noting that his average client plan spans about 35 years.

Valentine, whose firm manages about $600 million in assets, said he plans to break into the Facebook client base through connections with venture capital firms, and he has meetings set the next two weeks to leverage those relationships. “It’s the hot ticket in Silicon Valley,” he said of Facebook.

David Arizini, managing director of Constellation Wealth Advisors, has several current and former Facebook employees as clients and hopes they refer more of their friends.

But he knows that it will take time and work to win them over for his firm, a New York and Menlo Park-based wealth manager with about $4.5 billion in assets under management.

“They are very skeptical of the financial services industry largely because of what has transpired over the last three years,” he said. “So the bulk of clients interviewed five to 10 advisers before they made their choice.”

The imminent flood of Facebook dollars is sure to provide a welcome boost to local businesses in Silicon Valley, from high-end car dealerships to wine merchants.

Buff Giurlani, founder of car and wine storage service AutoVino in Menlo Park, is looking forward to an acceleration in already-brisk trade. “If a Facebook guy buys a house and wants to remodel it, maybe the contractor will buy another car,” he said. “Maybe the realtor will put a car in. There’s a trickle-down effect.”

For Facebook’s younger staffers, who favor jeans and T-shirts over designer suits, the shopping sprees will almost certainly involve computers and electronics.