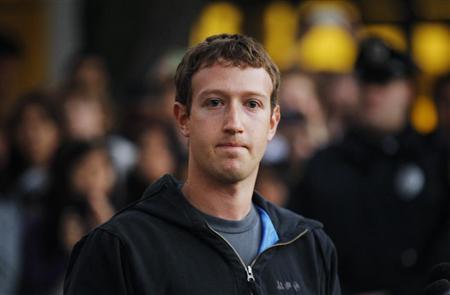 Mark Zuckerberg wants at least $5 billion from Wall Street investors, but those investors will not be getting much face time in return.

The Facebook co-founder and CEO made that clear when he skipped the social networking company’s first major briefing for analysts and bankers last week. The meeting was the first of many that will take place in the run-up to an IPO that could value the company at close to $100 billion.

Zuckerberg’s dismissive approach is hardly unique among elite Silicon Valley companies, but it could become an issue with investors because of the enormous control he exerts over Facebook via special shares.

“We don’t think that he should be hiding from the investors,” said Carin Zelenko, the director of the capital strategies department for the International Brotherhood of Teamsters, whose pension and benefit funds have more than $100 billion invested in the capital markets.

“He wants investors to put their money behind him, with the confidence in him personally, as the person who built this company and who’s going to lead it and control it. He should be accountable to those people who are investing.”

According to Zelenko, the Teamsters will send a letter to the trustees of the various Teamster funds advising them to be wary of long-term risks associated with investing in Facebook as a result of its “anti-investor” corporate governance structure.

Two people who attended Facebook’s March 19 meeting remarked on the young CEO’s absence and privately said they expected at least a cursory appearance. One analyst asked how involved Zuckerberg would be in future. In response, the company said expectations should be set pretty low, according to one of the two who was at the meeting.

“Investors are crazy to want to get in bed with a company where the guy who controls it doesn’t even pretend to care about the rest of the shareholders,” said Greg Taxin of activist investment firm Spotlight Advisors, who will not buy shares. “That seems like a recipe for disaster.”

The company has not yet publicly stated whether Zuckerberg will participate in the pre-IPO investor roadshow or on the quarterly earnings conference calls after the company becomes publicly listed. Facebook declined to comment on Zuckerberg’s expected level of involvement with Wall Street.

Zuckerberg is hardly a recluse. He speaks regularly at events to unveil new products and participates in media interviews. But he has been less than impressive in some of his on-stage appearances and his perceived charisma will become more important as he takes on the role of leading one the largest and most high-profile public companies in the world.

Supporters of Zuckerberg point out that the recipient of Time Magazine’s 2010 Person of the Year title has become increasingly comfortable in the spotlight, making appearances on television programs such as “The Oprah Winfrey Show” and “60 Minutes.”

He is also backed by an experienced management team, including Chief Operating Officer Sheryl Sandberg. A former Google executive, Sandberg has a highly polished public style and is well-versed in financial matters. Many expect her to become Facebook’s public face with investors as it enters the public markets.

That is fine with some on Wall Street. “I would always like access to the CEO, but the best use of his time is in running the company,” said Dan Niles, chief investment officer at AlphaOne Capital Partners. “I worry more about a CEO who seems to spend too much time talking to Wall Street and the media.”

As a private company backed by mostly venture capital, Zuckerberg enjoyed great leeway in choosing how to spend his time. But Zuckerberg will control 56.9 percent of post-IPO voting shares thanks to a dual-class stock structure and voting agreements with some early investors, and may face pressure to be more available to investors.

For the moment, with investor enthusiasm for Facebook burning hot, the dual-class structure and Zuckerberg’s lack of engagement are not likely to have a big impact on demand for the shares.

But some analysts and governance experts warn that investors may decide they need more face-time with Zuckerberg if the business hits a rough patch.

“The friction will grow between public investors and the company when the company is not able to meet earnings projections or growth projections,” said Jim Post, a professor at the Boston University School of Management.

“Investors aren’t going to be satisfied until they hear from Zuckerberg.”

Companies with dual-class share structures perform worse on average than those with regular stock that give investors equal voting rights, according to studies of corporations from 1994 to 2002 by professors Paul Gompers, Joy Ishii and Andrew Metrick.

“The risk is that a controlling shareholder so believes in his own vision and control that he’s going to be unwilling to take input from shareholders, or anyone else, or be much concerned about their well-being,” Taxin said.

Some tech companies have special shares and others have CEOs that shun Wall Street. But few combine both like Facebook.

Amazon.com founder and CEO Jeff Bezos and Apple’s late Steve Jobs, both of whom had little interest interacting with investors, owned much smaller percentages of their companies and had no special shares. Groupon Inc and Zynga Inc have dual-class share structures that give founders Andrew Mason and Mark Pincus extra voting control. But both of those executives actively participated in pre-IPO road shows and post-IPO earnings calls.

Google may come closest. Special shares give founders Larry Page and Sergey Brin voting power of about 29 percent each, while executive chairman Eric Schmidt has almost 10 percent, according to the company’s latest proxy filing.

When Page took over as CEO from Schmidt in 2011, he spoke for a few minutes on his first quarterly earnings conference call before signing off, provoking grumbles from investors.

“I just wanted to make sure that everybody knows he’s not going anywhere,” Pichette said.