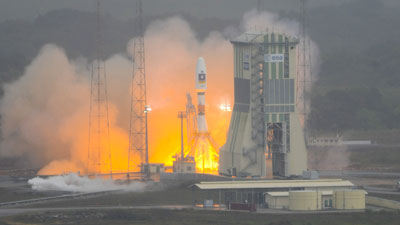 Europe’s first sat-nav satellites have been launched from a Russian rocket in French Guiana.

The Galileo spacecraft will give the continent independence from the US military GPS system.

When complete, the European network of satellites will also be far more accurate, pinpointing a sat-nav’s location on the Earth’s surface to within a metre.

The signal from the US satellites is deliberately downgraded for civilian use, so it only locates to within 33ft (10m).

The two satellites were launched on a Soyuz rocket from French Guiana. A problem with the launcher on Thursday forced the European Space Agency to delay blast-off.

A further 16 satellites will be launched by 2014 to make the navigation network operable. Eventually, a constellation of 30 satellites will orbit the Earth at an altitude of 14,429 miles (23,222 km).

Explaining Galileo’s significance, Professor Andrew Coates of the University College London’s Mullard Space Science Laboratory said: “It will give much better positioning, which is important, for example, for aircraft taxiing on runways.
“Navigation will be enhanced all over the world.”

Galileo will be inter-operable with the GPS and Russian Glonass systems, so sat-navs will be able to “see” more satellites in the sky. It should mean they fix on to signals more quickly and reliably even in cities.

Accurate positioning and timing signals from satellites are now crucial for aircraft, ships and the emergency services. But they are also relied on by power grids and mobile phone networks, and for financial transactions.

There are currently no comments for this story. Be the first to comment below, and let us know what you are thinking.