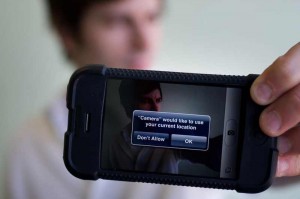 Tim Cook finally gets his chance to stride out from under Steve Jobs’ shadow, and he could not have picked a better time or device to mark his unofficial debut as Apple Inc’s CEO.

The latest generation of the iPhone — still the smartphone industry’s gold standard after four years — is expected to see the light of day this Tuesday, just in time for the holidays.

Even in a dismal economy, consumers should again line up in droves for a souped-up device that also marks Cook’s first major product launch since taking over from Jobs in August.

The so-called iPhone 5 is widely expected to have a bigger touchscreen and faster processor than the current iPhone 4, which helped the company stay a step ahead of rivals in an increasingly competitive smartphone market.

Its challenge will be to “wow” consumers with yet more game-changing innovations and top itself. The aging iPhone 4 is still an unqualified blockbuster: with more than 20 million sold in the third quarter that ended June 25 alone, it is likely to become the world’s top-selling smartphone.

“Consumers view Apple products as a must-have,” said Channing Smith, co-manager of the Capital Advisors Growth Fund, which owns Apple shares. “Apple phones and products have become almost a necessity. We don’t expect them to falter.”

But the latest version of the gadget that helped define the smartphone category is coming at a time when the world economy is slowing and competition is at its peak. More than 550,000 Google Inc Android-based devices — including tablets — are activated each day globally.

Apple’s ability to generate enthusiasm among consumers and its command of the higher-end market, however, may make it less susceptible to a broader slowdown, investors and analysts say.

Cook is likely to take the stage at Apple central at Cupertino’s 1 Infinite Loop, where Wall Street will get a chance to see first-hand how the acknowledged operations maven fares at a major product launch. Although a highly regarded executive, he is not known for pitching products.

Apple product launches are the most closely watched events on the technology calendar. The new model, which some have dubbed the iPhone 5, will have a bigger touch screen, better antenna and an 8-megapixel camera, one source with knowledge of the matter told Reuters in August.

The event will take place in Silicon Valley rather than downtown San Francisco where Apple made some of its most famous announcements.

“Most interesting is whether new CEO Tim Cook will lead the keynote and whether … Steve Jobs will participate,” Sterne Agee analyst Shaw Wu said.

“Tim is perceived as an operations and supply chain guru and that he certainly is, but we believe it is too early to write him off as not a visionary and showman like Steve Jobs.”

The Apple co-founder, a pancreatic cancer survivor who stepped down in August after his third medical leave, is expected to make an appearance, though a no-show by the Apple co-founder will not be a major disappointment.

“Investors would like to see Steve Jobs to confirm that he is still involved, but we have dealt with the fact that he’s not going to be as involved,” Smith said. “We’d love to see an appearance but it’s not critical.”

Apple’s iPhone has been a huge success since it debuted in 2007, transforming the company from a computer and music-player maker into one of the world’s leading mobile device makers. It accounts for about 40 percent of Apple’s revenue, with margins estimated at roughly 60 percent.

But it faces stiff competition from phones based on Google’s Android operating system, such as Samsung Electronics’ Galaxy line.

Yet longer-term, investors are more focused on Apple’s international push, particularly in Asia.

Cook has said China is a key market. The world’s most valuable technology company has mostly catered to the higher end of a booming market in those countries, but is now trying to release a cheaper phone, sources told Reuters in August.

Finnish rival Nokia dominates the lower end of the lucrative Asian market. Some investors and analysts expect another version of the iPhone 4 to be launched along with the next-generation model.

“We also expect the announcement of a lower-priced iPhone that will basically be a lower-cost 3GS,” Jefferies & Co analyst Peter Misek said, referring to the event.

The new phone is prompting Wall Street to forecast that Apple will post enormous sales in the October-to-December quarter, with shipments expected to be in the range of 29 million.

The iPhone is currently sold by AT&T Inc and Verizon Wireless, a venture of Verizon Communications Inc and Vodafone Group Plc. Many analysts expect Sprint will become the third U.S. operator to sell the iPhone when the next version is launched.

The new phone is also expected to accelerate the momentum in Apple shares, which are trading at around $381, off a record high of $422.86. The stock remains a far cry from brokerage price targets that range from an average of $490 to a high of $666.

The launch event invite, when it landed last week, set off a typical frenzy of speculation. Various analysts quickly dissected one image in particular on the Apple invitation, which depicts four familiar icons found on iPhones, as a possible signal for the number of new phones to be unveiled.

Speculation about the new iPhone’s features is fevered, with the list of possibilities ranging from faster wireless Internet connectivity to voice-navigation capabilities.

“What we found most intriguing is that the green phone icon on the invite has a number 1 next to it, perhaps signaling that only one new iPhone will be announced,” Wu said.