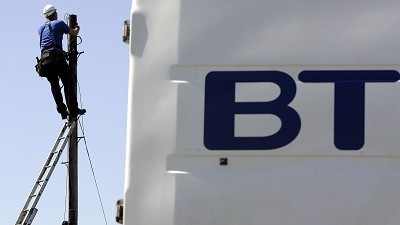 Telecoms firm BT stepped up the pace of its broadband expansion by promising “ultra-fast” speeds of up to 300Mb by next spring.

Its current broadband speeds are closer to 40Mb (megabits per second), with most of the country seeing a typical speed of 7.6Mb, but it has announced it will make a much faster service available from spring 2013.

The roll-out, through BT’s infrastructure division Openreach, will see faster fibre cables installed between cabinets on streets and homes and businesses, which will also be made available to other providers such as Sky.

The ‘ultra-fast’ service is likely to be most useful for small business and will be available on-demand in parts of the country where BT has already rolled out superfast broadband.

The announcement comes as BT revealed an 18% rise in underlying profits to £628 million in the three months to December 31 as it continued to keep a tight lid on costs.

More than 250,000 homes and businesses signed up to its broadband network in the quarter, with BT Retail winning 56% of these and competitors such as Sky and TalkTalk accounting for the rest.

Meanwhile, BT confirmed plans to double download speeds for its own customers for areas that have superfast broadband to 80Mb by the spring. It had previously said it would happen in coming months.

BT said some seven million businesses and households can now access superfast broadband over its network as it replaces slower copper cables with much faster fibres between its exchanges and cabinets on the street.

But speeds have been limited so far because the cables that connect homes and businesses to the cabinets are typically still copper. It has now offered to run additional fibre to a home or business on demand to speed up the final link in the connection. The roll-out of its ‘ultra-fast’ broadband service follows a successful trial in St Agnes, Cornwall.