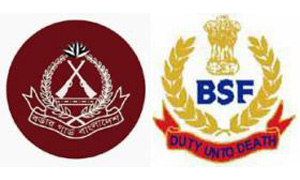 DHAKA, Sept 18, 2013 – A five-day conference between Border Guard Bangladesh (BGB) and Border Security Forces (BSF) of India ended here today with an agreement to bring the border killing to zero-level.

The conference began on Saturday at BGB headquarters in Pilkhana in the city and ended by signing a joint record of discussions between the two sides.

Both sides agreed that incidents of loss of life on the border are extremely unfortunate and regrettable and they agreed to take all possible measures to bring down the death toll further.

Both BGB and BSF have put in place mechanisms which have greatly reduced the scope for such incidents and have strengthened mutual trust and goodwill among the border guarding forces and people living in the border areas.

The conference was informed that the number of such incidents has steadily come down in the last few years. To ensure that no incidents take place in future, both the border guard forces must work jointly and further enhance cooperation to eliminate illegal trans-border activities.

They discussed various measures to curb trans-border crimes and agreed to increase coordinated patrolling on the border to prevent movement of criminals, smugglers and insurgents across international boundary.

On security-related issues, an official familiar with the process said, both sides reiterated their commitment to continue mutual cooperation and decided to adopt multiple channels of communication between the commanders at the root level for quick and timely decisions in case of incidents on the border.

During the talks, they also agreed to prevent smuggling of fake currency notes, drugs, narcotics including Phensedyl, and to continue close cooperation, including sharing of intelligence and interrogation reports on traffickers’ details, forward and backward links, and follow up of trials in this regard.

The conference also decided to complete the joint verification of unfenced patches at the earliest. On the issue of illegal border crossings and human trafficking, both the sides agreed to maintain the sanctity of the international border and take appropriate steps to prevent such activities and emphasized the importance of sensitization of border people in this respect.

BGB and BSF officials also agreed to focus on several Confidence Building Measures, such as inauguration of Joint Retreat Ceremony at Petrapole-Benapole border by the Home Ministers of both the countries, Specialized Training programs for personnel of both the forces, Inter Force Shooting Competition, increasing interaction between Nodal Officers of the forces at various tiers.

It was also decided that representatives of both the forces would attend each other’s ‘Raising Day’ ceremonies at various levels. The conference ended in a high note with both the forces agreeing to sincerely disseminate the decisions taken down to the soldiers standing at the borders.

The BSF delegation will leave here for India tomorrow.