Bangladesh win by 2 wickets with death over thriller 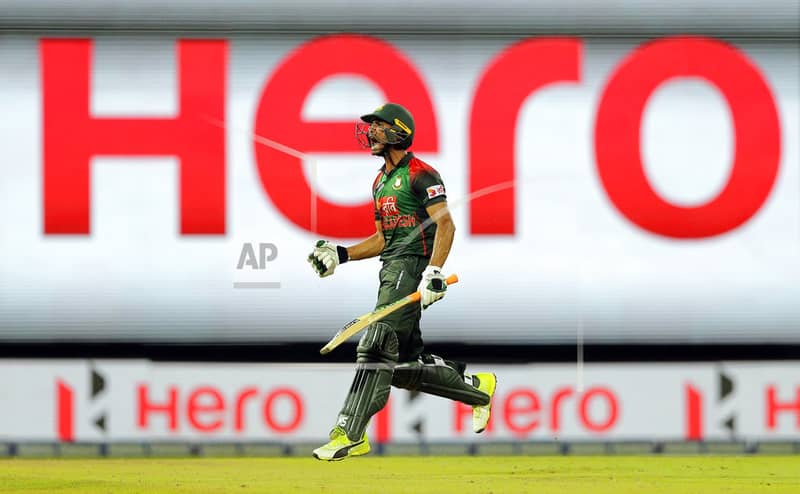 #thenewscompany – Bangladesh stormed into the final in the Nidahas Trophy tri-nation T20I tournament eliminating hosts Sri Lanka by two wickets with one ball remaining in the 6th match at R Premadasa Stadium in Colombo on Friday. The Tigers will play the final against giant India at the same venue on March 18.

Bangladesh chased down a target of 160 for 8 in 19.5 overs showing death over thrillers where man of the match Mahmudullah Riyadh hit required 12 with 4, 2 and 6 runs in the last three balls of the innings. This is Bangladesh’s 2nd successive win against Sri Lanka among four victories against seven losses in their 11 T20I encounter since August 2007.

The day’s hero Mahmudullah played quick-firing 43* off 18 balls, including three boundaries and two sixes, while dashing opener Tamim Iqbal hammered 50 and also shared a partnership of 64 off 8.4 overs in the 3rd wicket with consistent performer Mushfiqur Rahim.

Tamim-Mushfiq recovered the early jolt, starting after the dismissal of Sabbir Rahman on 33/2 in 3.5 overs and ended on 97/3 in 12.3 overs as Mushfiq was caught by Kusal Perera off Amila Aponso. Bangladesh again suffered with the loss of two wickets within a span of 4 off 5 balls as Tamim and Soumya Sarkar were out on 105/4 in 14 overs and 109/5 in 14.5 overs respectively.

Skipper Shakib Al Hasan should have stay with Mahmudullah in the next wicket but was unfortunate, leaving the ground on 137/6 in 18th over. Then the next two wickets — Mehidy Hasan Miraz and Mustafizur Rahman – were run out with ducks before Rubel Hossain, who didn’t get the bating end, came in. On his way to 5th T20I half century, Tamim played the innings off 42 balls to fire four boundaries and two sixes, before being caught behind by Kusal Perera off Danushka Gunathilaka.

Pace bowler Rubel Hossain got Thisara Perera (58 off 37b; 3×4; 3×6), was caught by Tamim Iqbal on 154/7 in 19.2 overs. Returning on the ground recovering from finger injury after around a one and half month break, all-rounder skipper Shakib made the first breakthrough for the Tigers dismissing opener Danushka Gunathilaka, caught by Sabbir Rahman, in his first ball of the 2nd overs when scoreboard showing 15/1 in 2.1 overs.

The Tigers continued putting pressure, grabbing next four wickets for 26 runs in 6 overs, as Sri Lanka collected 41/5 in 8.1 overs before Kusal Perera and skipper Thisara Perera started their 6th composures to recover the initial damage.

Earlier, Bangladesh lost their first game by six wickets against India before crushed Sri Lanka by five wickets with a record chase of 215 runs and again lost to India by 17 runs in the 5th games of the tournament. Sri Lanka routed India by five wickets in the opener of the seven-match tournament before lost to Bangladesh and conceded a six-wicket defeat against India in the 4th T20I.

Tags: Bangladesh win by 2 wickets with death over thriller