Bangladesh to live up with democracy, equity and justice: PM says to liberation war friends 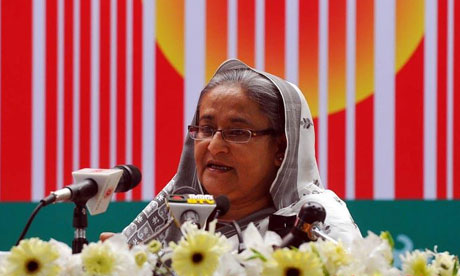 Bangladesh to live up with democracy, equity and justice- PM says to liberation war friends

DHAKA, Dec 15, 2012 (BSS)- Prime Minister Sheikh Hasina today expressed her steadfast resolve to live up with the expectation of the international community to uphold the principles and values of equity, democracy, social justice, inclusive development and rule of law for which Bangladesh was born 41 years ago.

“The world acknowledges Bangladesh as a country where moderation and tolerance are practiced–, we are steadfast in our endeavour to live up to your expectations and turn Bangladesh into a country that you had envisioned while extending your support in 1971.

A total of 60 individuals and two institutions were given the honour at a function at Bangabandhu International Conference Centre in this phase under a plan taken by the government in 2011 to honour more than 500 foreign friends and institutions for their sincere support and cooperation to the War of Liberation of Bangladesh in 1971.

“We are proving that we are worthy of the trust and confidence you had reposed on us, and we believe that our foreign friends are the equal partners of our accomplishments,” the Prime Minister said.

She said, “On this occasion we are offering you, the nation’s deepest sense of gratitude for what you have done towards attainment of statehood by Bangladesh. Our tribute epitomizes the sentiment of an indebted nation, love of its people and it’s the manifestation of how deeply we value our friendship.”

“I am deeply honoured to be in your midst. Your presence brings back the memories of the tumultuous days of 1971 and also a feeling of reassurance,” Sheikh Hasina said.

“This august congregation exemplifies the strength and beauty of friendship and amity. This is also a rare opportunity for our people particularly the young generation to know and learn about their foreign friends and unsung heroes, many of whom worked behind the scene for our independence,” she said.

Sheikh Hasina said, Our land had been the target of oppression from time immemorial; our people were subjected to all possible sorts of atrocities and injustices, the latest of which unfolded after the partition of 1947.

But each time our valiant and indomitable people had broken out, though at huge costs, the shackles of subjugation. Since the partition, the greatest Bangalee of all times, our Father of the Nation Bangabandhu Sheikh Mujibur led us in all odds and finally responding to his clarion call in 1971, the mass people of Bangladesh waged the epic liberation struggle and earned the independence through a nine-month long bloody war.

“We had little means but we drew strength from our high moral standing and triumphed over insurmountable adversities,” she said adding the support of our foreign friends came at a critical juncture when we were engaged in this unmatched battle and freedom-loving innocent people were trying to ward off the wrath of a ruthless modern occupation army.

“Our fault, we stood up against discrimination and fought for a just cause, self-determination. It was one of the darkest period of human history, a time of unprecedented genocide and brutalities the world has rarely seen,” she said.

Sheikh Hasina said, It was immensely emboldening to find the majority of the world community on our side in our trying time. We knew that we were not alone, our foreign friends were out to helping us. It was such a source of inspiration, she said adding “in fact, it was our foreign friends who inspired people all over the globe and played the lead role in mobilizing the world opinion in our favour.

She said, the just struggle for our emancipation received significant boost from their invaluable contribution and their intervention helped change the approach of many countries which were initially not so sympathetic to our aspiration but later paid heed to our saga of sorrow and humiliation.

The Prime Minister noted that many of our foreign friends had little or no prior connection with Bangladesh. It would not have mattered anything to many of you had Bangladesh not become independent. Still you stepped forward, provided us moral, spiritual and material support. You simply listened to your heart, rose in protest against the atrocities perpetrated by the occupation army, she maintained.

Sheikh Hasina said, the contribution of foreign friends to the War of Liberation is immeasurable and it cannot be repaid. It was purely a selfless act which would serve as glaring examples for the humanity and the posterity, she added.

Highlighting her government’s relentless efforts to turn Bangladesh into a happy and prosperous ‘Golden Bengal’ as dreamt by Bangabandhu, the Father of the Nation, Sheikh Hasina said, We resolve to become a middle income country within a decade.

She said, by honouring you, we are honouring ourselves, the nation feels happier. This reconnects and bonds us afresh with you and through it serves to enhance our relations with the countries you belong to.

She extended her gratitude to the foreign friends for responding to the Bangladesh government’s call even though after more than four decades and many of them have braved old-age complications, traveled thousands of miles, and ignored personal inconveniences.

“These are the testimonies of the indelible bond of friendship, love that you still espouse for Bangladesh, the nation that you had a hand in its birth,” she said.

Foreign Minister and chairperson of the national committee for honouring the Friends of Bangladesh Dr Dipu Moni, State Minister for Liberation War Affairs AB Tajul Islam addressed the ceremony. Ambassador Jagadish C Sharma, spoke on the occasion on behalf of the recipients.

The cabinet secretary, M Musharraf Hussain Bhuiyan, conducted the programme and read out the citations.